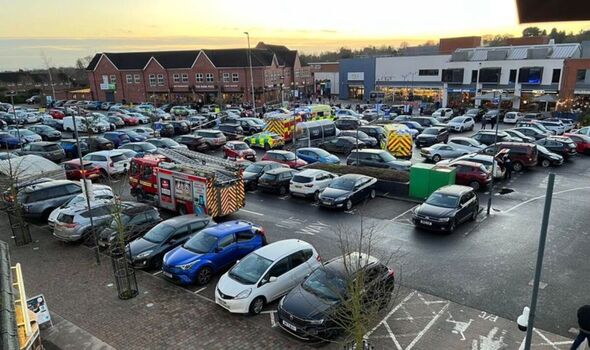 One woman was airlifted to the hospital with injuries not believed to be life-threatening, while two others have suffered from minor injuries, following a car collision on a car park in Sutton Coldfield, local police say. The three women have been rushed to hospital after suffering from what was initially thought to be potentially serious injuries. Medics raced to the scene, according West Midlands Ambulance Service, and an air ambulance also attended.

A spokesperson for West Midlands Ambulance Service reportedly said: “We were called to reports of a collision between a car and pedestrians on Lichfield Road, Four Oaks, at 3.32 pm.

“On arrival we discovered three female patients, all pedestrians. One was treated for serious injuries before being taken to Queen Elizabeth Hospital, Birmingham by land ambulance.”

An unspecified number of people were hit by a car in a car park at around 3:30 pm, local police added. The driver stayed at the scene and is helping police officers with inquiries.

West Midlands Ambulance Service confirmed in a statement the three women were taken to the nearest hospital: “The doctor from the air ambulance travelled with the patient in the back of the ambulance to help continue treatment en-route to hospital.

“The remaining two patients were treated for potentially serious injuries before being taken to Heartlands and Good Hope Hospitals. The driver of the car was uninjured.”

In a tweet, Sutton Coldfield Police said: “We’re at the scene of a collision off Lichfield Road in Mere Green, Sutton Coldfield, this evening. It’s believed a number of people were hit by a car in a car park around 3.30pm today. The driver stayed at the scene and is assisting our officers with inquires.”

Local police is asking people who may have filmed the scene to not share footage on social media and send it directly to them. They also called on residents to provide any information they have regarding the collision.

First picture of boy, 9, killed by lightning strike as he played football