Home » Europe » Tier 4: What areas have moved into Tier 4 after Hancock announcement

Matt Hancock added that three-quarters of the country will be in Tier 3 or Tier 4 by Thursday morning. He said: “Even in most areas not moving into Tier 4, cases are rising too, and it is, therefore, necessary to apply Tier 3 measures more broadly too – including in Liverpool and North Yorkshire.

“The rest of Yorkshire remains in Tier 3. These changes will take effect from 00:01 tomorrow morning.

“The new variant means that three-quarters of the population are now going to be in Tier 4 and almost all of the country in Tiers 3 and 4.

“And I know that Tier 3 and 4 measures place a significant burden on people, and especially on businesses affected, but I am afraid it is absolutely necessary because of the number of cases that we’ve seen.

“But where we are still able to give places greater freedoms, we will continue to do so.”

The areas to go into Tier 4, according to the Department of Health, are:

– the city of Leicester 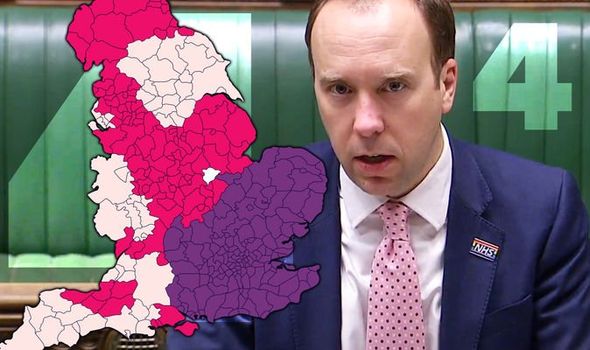 Coronavirus: Possible but not certain vaccine rolled out this year, says Oxford developer