THE HAGUE — Jessa van der Vaart and Rosaliene Israel, two Dutch pastors, usually get to church by cycling through the streets of Amsterdam to a Protestant parish in the city center. But last Wednesday night, they packed their robes into the trunk of a car and drove down the highway to The Hague for what was the equivalent of a priestly shift change.

They would take over at 8 p.m. from a local minister at the modest Bethel Church. Then, at 11 p.m., they would be replaced by a group from the city of Voorburg, who were scheduled to pull an all-nighter, singing hymns and preaching until daylight, when another cleric would arrive to take the baton.

The two pastors from Amsterdam were running slightly late. “Well,” said Ms. van der Vaart, as Ms. Israel started the engine. “They’ll have to keep going till we get there.”

For the marathon church service, which started more than six weeks ago, and hasn’t stopped since, can never take a break.

Under an obscure Dutch law, the police may not disrupt a church service to make an arrest. And so for the past six weeks, immigration officials have been unable to enter Bethel Church to seize the five members of the Tamrazyan family, Armenian refugees who fled to the sanctuary to escape a deportation order. 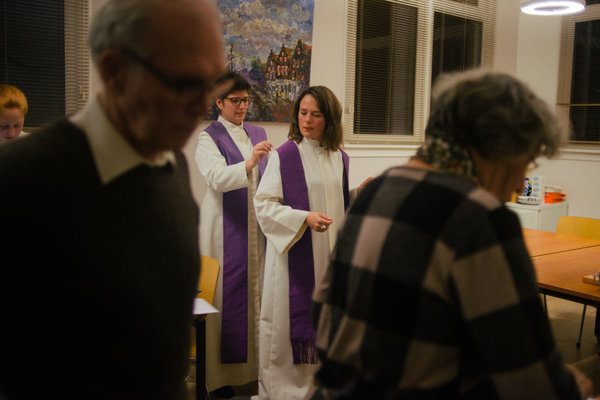 The service, which began in late October as a little-noticed, last-gasp measure by a small group of local ministers, is now a national movement, attracting clergy members and congregants from villages and cities across the Netherlands. More than 550 pastors from about 20 denominations have rotated through Bethel Church, a nonstop service all in the name of protecting one vulnerable family.

“It’s about practicing what we preach,” said Ms. van der Vaart, as she and Ms. Israel sped down Holland’s A4 highway toward the church.

At a moment when Christianity’s relevance in Europe is waning — and when xenophobia and nationalism are rising — the Bethel service has also been a reminder of the influence that religious institutions can still exert in a largely secular Western Europe. The pastors have given protection to the Tamrazyan family; the family has given them a cause to show the power of their faith.

“We’re kind of struggling here as churches in the West, we’re more and more in the margins, and as church leaders we can kind of feel this,” said Ms. Israel, who is the secretary general of Protestant Church Amsterdam.

“But with this,” she added, “we feel that what we’re doing is quite relevant.”

In recent years, nationalists have used xenophobic messaging to win office in Italy, Hungary and Austria, and achieve prominence in Sweden, Germany, Britain, France and Holland, underscoring the impression of a European continent that is turning inward. But as the two pastors reached the outskirts of The Hague, Ms. van der Vaart said the marathon at Bethel shows that another Europe still exists.

“I often think we’re entering times with less and less solidarity,” said Ms. van der Vaart, the vicar at the Oude Kerk, the oldest church and building in Amsterdam. “But then this initiative is all about solidarity, and that gives me hope.”

If you weren’t looking for it, you might walk straight past Bethel Church, a red-brick building tucked away on a quiet side-street in The Hague. Inside is a wider complex, which includes accommodation for the Tamrazyan family, as well as various offices and meeting rooms. At first it seems sort of mundane.

When Ms. van der Vaart and Ms. Israel arrived, with a few minutes to spare, there were no police officers waiting to pounce. The sheer fact of the ongoing service is enough to keep them away. The two pastors quickly donned their robes and hurried into the chapel. On the tiled wall behind the altar hung a migration-themed interpretation of the Madonna and child — a portrait of an African refugee and her baby, dressed as Mary and Jesus.

In the pews sat roughly a dozen worshipers, some of whom had come before, some there for the first time. Most were believers, but one or two were not.

“I’m not religious but when I heard about this, I said to my husband, ‘Don’t be shocked, but I want to go to church,’” said Florine Kuethe, a public relations consultant who later agreed to help the church deal with the heightening news media interest. “This type of thing makes the church relevant again.”

Inside the chapel, the pastors began with a greeting, then a rousing Dutch hymn, then Psalm 82.

“Rescue the weak and the needy,” read the translation of one line. “Deliver them from the hand of the wicked.”

The three Tamrazyan children — Haryarpi, 21, Warduhi, 19, and Seyran, 15 — came in and out, frequently playing an active part in the service. Journalists, however, were only allowed in for brief sequences, a rule the pastors said was to ensure that the service retained its spiritual value, instead of becoming a media spectacle.

“Sometimes I look back and ask why it has been as big as it has,” said Pastor Derk Stegeman, a spokesman for the family, and the service’s main organizer. “It’s because we protected our service and did not make it into an action for other things.”

Where It All Began

The story of the service started not in The Hague but in Katwijk, a large seaside town just north of Amsterdam. The Tamrazyan family ended up there after the father was forced to flee Armenia for political reasons in 2010, Mr. Stegeman said. At the family’s request, their full predicament has been kept a secret, along with the names of the parents, to prevent repercussions for relatives still in Armenia.

In a six-year legal process, Dutch officials twice tried to deny the family asylum, and were twice defeated in court. But the government finally got its way on its third attempt, even though the three children had all been in the country for more than five years and were theoretically eligible for an amnesty under legislation enacted in 2013.

Lennart Wegewijs, a spokesman for the Dutch ministry of justice and security, said that the government could not comment on individual cases. But speaking generally, he said that under Dutch law, families can only qualify for amnesty if they, somewhat paradoxically, are willing to cooperate with official efforts to deport them from the country.

To avoid what they believed to be certain danger back in Armenia, the Tamrazyans did not cooperate. Instead, they took refuge in a church in Katwijk. It was when that first church ran out of resources to help them that the leadership at Bethel agreed, after some deliberation, to welcome the family instead.

As well as maintaining round-the-clock prayers, the church has provided psychological help for the family and teaching for the children, who can no longer go to school or university classes.

To avoid compounding their stress, the family rarely gives interviews, and they made no exception for The New York Times. But on a blog that Haryarpi, the eldest child, started soon after entering the church, she has written about the relief of being granted shelter.

“I often think the only place where I am safe is the church,” she wrote in Dutch on Nov. 4. “It really feels like a refuge.”

The pastors have promised to continue the service indefinitely — even after a Dutch minister, Mark Harbers, said on Friday that the service hadn’t changed the government’s mind.

Initially, the nonstop services were run by a core group of around a dozen pastors. Some of them pulled all-nighters on their own, including Mr. Stegeman and his wife. But a few days into the process, the leadership of the Protestant Church in the Netherlands endorsed the service and used its newsletter to encourage other congregations to participate.

Soon it became hard to fit all the volunteers into the schedule.

“It’s amazing,” said Mr. Stegeman. “From all over our country people are coming, from the north to the very south, west and east.”

Some preachers simply reuse services and sermons they gave at other churches. But others have used the opportunity to try something new, turning the church into a kind of greenhouse for liturgical experiments.

Ms. Israel read from a modern reinterpretation of the biblical story of King David and his wife Bathsheba, told from Bathsheba’s perspective. One minister incorporated meditative song into her service, and another interspersed prayers and hymns with sermons from Martin Luther King Jr. During one all-nighter, Mr. Stegeman even brought along a harpist.

“You see preachers from every background across the country, bringing their own way of celebrating and worshiping that is different hour by hour,” said Pauline Kuipers, who chairs the fund that owns the church. “It goes on continuously but it changes all the time.”

By 11 p.m., the two pastors from Amsterdam were relieved by the group that had just arrived from Voorburg.

But she was also moved. As Ms. Israel left the chapel, Haryarpi told her that she had been inspired to write a poem about one of the psalms they had sung.

“For me, that’s what it’s all about,” Ms. Israel said a few minutes later, packing her robes back into her cycling bag.

“You could read that psalm a hundred times and not get touched by it,” she said. “But here, in this night, in Bethel Church, it’s very real.”

UK PM Johnson was in contact with Covid-19 carrier, confined to office work