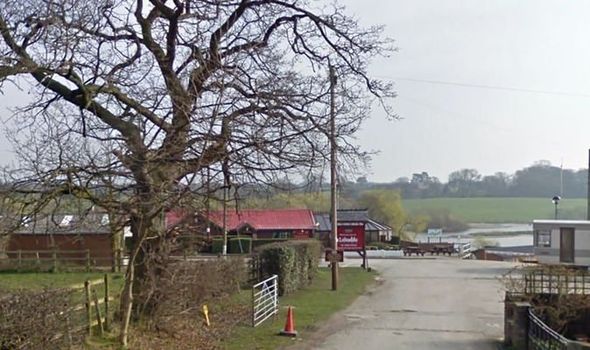 Medics desperately tried to resuscitate 16-month-old Corey James Holland but he died in hospital. His dad Phillip Holland had found his son face up in the water near to a jetty at Lakeside Caravan Park in Winsford, Cheshire, after the tot managed to escape their caravan.

The toddler’s inquest on Thursday heard that when Phillip and his family woke, they found Corey wasn’t in his travel cot and one of the caravan doors next to the room where the baby was sleeping was slightly ajar.

Phillip then woke his partner Kimberley Mackenzie and told her Corey was not in his bed and the family began frantically searching for him, reports Cheshire Live.

The dad had told the hearing he had made sure Corey was “fast asleep” the night previous but the child usually slept in the same room as him and his partner at home in Wallasey, Wirral.

One woman at the caravan park told a despairing Philip she had seen a child but she said she “didn’t know” why she didn’t stop the baby.

And Philip made the sickening discovery just minutes later at around 9am on August 22, 2019.

I conclude that Corey died as a result of an accident. A very tragic accident… You’re a lovely family and I can see that

In a statement read at Warrington Crown Court, Phillip said Corey knew how to open the door when it was unlocked, but the family were unaware he knew how to do it when it was locked.

Phillip and Mackenzie, staying at Philip’s parents’ caravan with Corey and their other children, had ensured the door was firmly locked the night before the tragedy.

Alan Moore, senior coroner for Cheshire, recorded the medical cause of death was “consistent with drowning”.

“You’re a lovely family and I can see that.

“I want to say how incredibly brave you have been today and not just today, as I know you have lived with this for a long time.”

Other holidaymakers and residents at the site had seen a baby wandering away from the caravans, the inquest was told.

One man said he had seen a baby wearing pyjamas walking in between the caravans at around 8.20am but assumed someone was watching him or was there.

At around 8.30am another witness, a resident of the caravan site, said she saw a toddler near to one of the caravans adjacent to the lake but could not tell if it was a boy or girl.

She said she assumed that they were “walking towards someone” or to one of the caravans and said it was “only a couple of seconds” she saw him as she decided to make a cup of tea.

The caravan site resident said she then heard shouting and and saw a man, woman and three other children who were “running in different directions” and appeared to be looking for someone.

She then asked the man if he was looking for someone and he said “yes the baby, the baby” in which she replied that she had seen a baby and he told her “he’s just a baby.”

The woman said in her statement she later heard a man shout “help me, help me” and when she looked out of her kitchen window she could see a man walking up and “carrying something” on his shoulder.

She said it was then she knew “something terrible had happened” as the baby did not appear to be moving and she called for an ambulance.

The woman said she was “devastated” to find out later that day the baby had died.

The court heard how a maintenance manager of the site also carried out CPR before an ambulance crew arrived and took over.

He was acting as senior paramedic in a rapid response vehicle when he arrived at the scene at around 9.12am.

He said an ambulance crew was already in attendance and they arrived at 9.08am and were performing CPR as Corey was in cardiac arrest.

The crew then started performing advanced life support, which includes opening up the airway, giving oxygen and drugs such adrenaline.

Paramedics then decided to take Corey to Leighton Hospital in Crewe, Cheshire, where he was still in cardiac arrest and arrived at 9.32am.

Mr Fowles told the court there was no rhythm to Corey’s heart in the ambulance and when he arrived at hospital.

Doctors and medics at the hospital then took over resuscitation, however despite their best efforts pronounced Corey dead at 10.14am.

Detective Inspector Stuart York, of Cheshire Police, was also in attendance at today’s inquest and said he found no evidence of third party involvement or suspicious circumstances.

Det Insp York added it was not known whether Corey went into the water out of his own “inquisitiveness” or fell in, as no one had seen him by the water.

He said: “I am satisfied that the evidence pointed to being a tragic accident.”

At the hearing, Corey’s granddad James Holland asked the coroner to clarify whether an on-site defibrillator could have made a difference.

Mr Moore said according to the evidence from paramedics, due to there not being a shock-able heart rhythm for Corey, a defibrillator would not have worked.

Mr Holland added that if there wasn’t a defibrillator on site there ‘needs to be one’ as it is a family caravan park.

He added: “We do not want anyone else to go through what this family has gone through.”