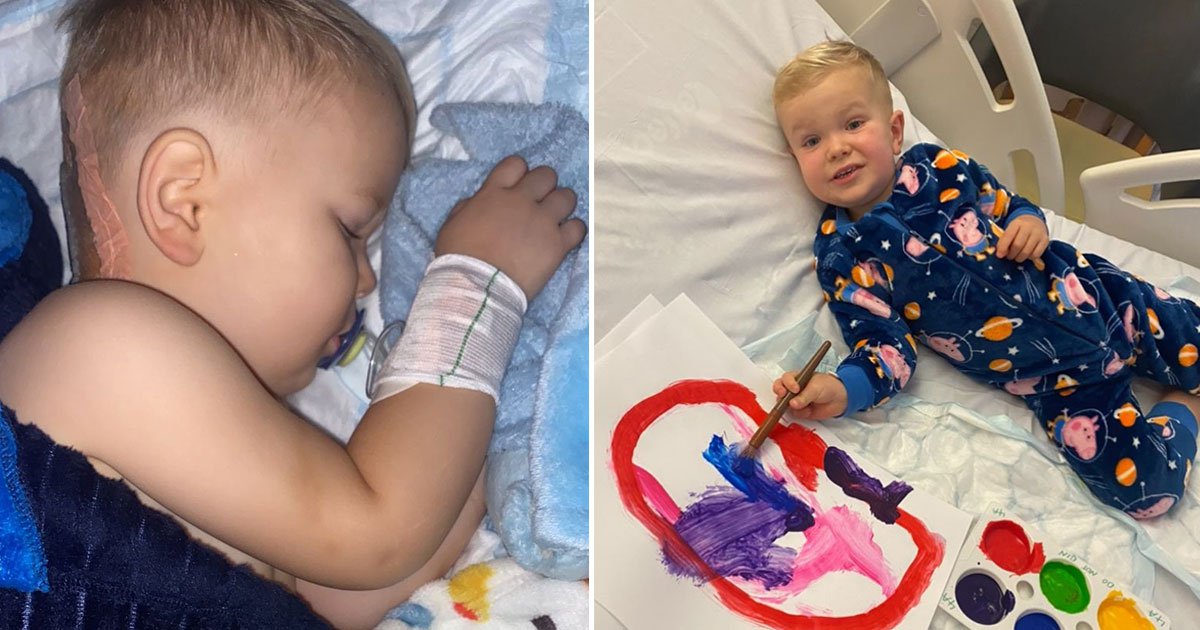 A toddler was diagnosed with a rare brain condition after his mum begged doctors to listen to his screams.

On their way home from nursery one day, mum Samantha McGee’s one-year-old son Lenny started crying and complaining of lower back pain.

Being such a youngster Samantha brushed off his concerns, assuming he had an accident at nursery. But she became increasingly concerned after Lenny screamed in pain again while playing on the floor.

She and her husband rushed him to A&E, but doctors said he was fine after doing some checks.

Samantha, from Knowsley, Merseyside, said this happened a few more times and she knew her son was in ‘really bad pain’.

After taking him to hospital again, Lenny’s parents said ‘every test imaginable’ still couldn’t find the source of his pain.

Samantha told doctors that ‘as a mum I know something is wrong’.

Lenny was then sent to another hospital where further tests revealed what was going on.

Speaking to the Liverpool Echo, the mum-of-two said: ‘Lenny was only one at this point and she [the medic] said “Lenny, what’s happened?” and he said “my back hurts, right there” and he pointed to the bottom of his back and he showed her exactly where it hurts.

‘She said “I am not happy he can tell me that aged one, the pain must be really bad for him to know”.’

The toddler was sent for an MRI scan on Thursday, September 1, and his parents were told to expect results in four weeks. But doctors phoned Samantha the following Monday to confirm Lenny had a brain condition.

The two-year-old was diagnosed with Chiari Malformation Type I, a rare malformation in babies and children. This is where the back of the brain extends into the spinal canal, putting pressure on the brainstem and spinal cord.

Samantha said: ‘Basically his brain is too big for his skull. His brain over-leaked his skull and was starting to stop the fluid from going down his spine and flowing round his brain like it should do. His symptoms were lower back pain.’

Doctors said Lenny would need an operation and booked him in for another scan to see if his condition worsened.

Shortly after the scan, Lenny started suffering with severe pain in his knees, which left him crying in pain and unable to walk.

She said: ‘The surgeon walked into the room and said to me “I have looked at his scan already and it has gotten progressively worse. All the fluid balls that have locked on his spine have burst open and his brain is starting to be pulled down his spine now”.’

Lenny had an emergency decompression surgery on his brain on November 11 – just one day after his next MRI scan was scheduled.

The operation involves a surgeon making a cut to the back of the head, before they remove a small piece of bone from the base of the skull and top of the spine.

This helps reduce pressure and allows fluid around the brain and spinal cord to flow normally.

Lenny will always have the condition and it is unlikely he will be able to play contact sports or go on things like fairground rides. Despite what he has been through, Samantha said Lenny is a ‘happy little soul.’

She added: ‘Going forward we don’t think he will be able to play contact sport, go on the fair, all that type of stuff. All that is out of order for Lenny now, so it has changed his life in a way because all the stuff that children and boys his age will be doing, he now can’t do.

‘In a way it has sort of changed how he is going to live. But he is a happy little soul. He has been amazing and you wouldn’t even know. He’s been so good. He is so, so brave, he was just unbelievable.’