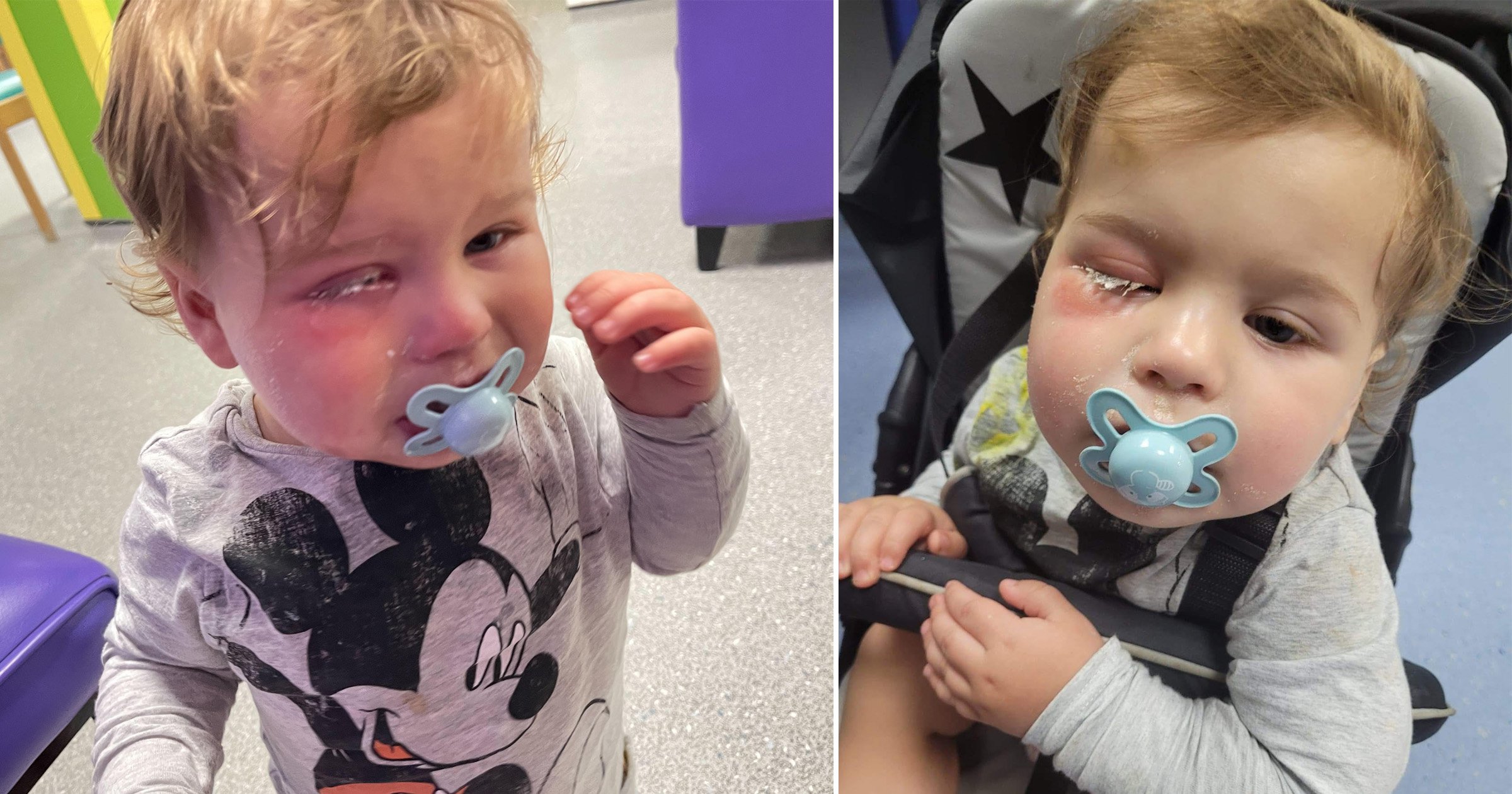 A nursery staff member squirted glue in a toddler’s eye as she fixed her fake manicure.

Poor Jack Culverhouse was left in tears after the disturbing incident at First Steps Day Nursery in Skipton, North Yorkshire.

Pictures show the one-year-old’s face all swollen and red, with his eyelashes also glued together.

At first, his mum Aimee assumed it was PVA glue used in arts and crafts, but when she got to the hospital it turned out that it was glue used to stick acrylic nails.

According to a spokesperson for the nursery, the incident occurred when a worker tried to re-stick her false nail with Jack in her arms.

‘I got a phone call saying Jack had glue in his eye. At first, with it being a nursery, I thought it was PVA glue, but when I got to Airedale Hospital I found out it was nail glue,’ the 18-year-old mum said.

‘At first I just wanted to take care of him, but afterwards I was like “What the hell has gone on”.

‘His sight won’t be affected but I think he’s traumatised. He used to sleep through the night perfectly and now he’s just scared.

‘I’m angry and upset. I put all my trust in them and then this happens. I’m furious.’

Miraculously, Jack instantly shut his eyelids and the glue did not affect his eyeball.

The little boy had been attending the nursery three days a week for seven months and his mum had been pleased with his progress.

But Aimee is now planning to sue after the incident on September 23.

She said: ‘At the hospital I was told he reached up on a counter and knocked it on him but then I had a meeting with the nursery the week after and was told that one of their staff members went to go and pick him up and this lass had some nail glue in her hand.

‘Apparently her nail had broken and she went to pick up my son and splashed the glue in his eye.

‘We were sent to an eye specialist as we weren’t 100% sure whether he’d got it in his eye or not.’

The nursery carried out an investigation into what happened, insisting this is an ‘isolated case’.

The member of staff involved was also immediately suspended from work and later dismissed.

A statement from First Steps added: ‘We acted immediately when the incident happened, with staff giving first aid and on paramedics’ advice when we phoned for an ambulance, we took the child to hospital for treatment.

‘We take the care and safety of all the children at our nursery extremely seriously, it is our main priority.

‘As such we implemented our safeguarding protocols, informing both the local authority and Ofsted of this incident.

‘The member of staff involved was immediately suspended from work and following our investigation was ultimately dismissed.

‘Ofsted attended and inspected the nursery on October 10 and have no concerns with the operation of the nursery or the actions we have taken.

‘This was clearly a very distressing incident for the family and the child, we have maintained contact throughout and kept them updated with the progress and outcomes of the investigations conducted by us and by Ofsted.’