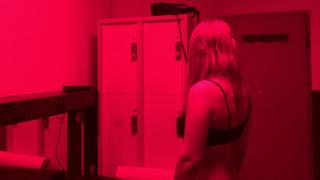 But many of the women who sell their bodies are increasingly struggling to attract paying clients because their shop windows are obscured by selfie-snapping tourists, interested in free photo-ops rather than paid sex.

The Dutch capital’s first female mayor is trying to find a solution. Femke Halsema is preparing to set out a range of measures to help the sex workers escape the cameras’ glare.

“It’s the biggest free attraction park in the whole of Amsterdam,” says Frits Rouvoet. As he guides me though the spider’s web of cobbled alleyways, many of the prostitutes throw him a familiar wave.

Frits runs a bookshop in the red light district and often invites the women in for coffee, a moment of respite from the abuse and intimidation they are subjected to in the street.

“There’s nowhere for them to run to,” he explains. “If they want to make a living, they have to stand in the window but there are many, many men coming. From England, Scotland, Ireland. Drunk, screaming, trying to make pictures.”

‘My kids don’t know what I do’

Young women try to hide their faces, as tourists gawp and brandish their smartphones. For many this is a secret life. Having their photo placed on social media could see them ostracised by their families.

Kristina opens her door, shivering as the icy air hits her exposed stomach.

She stubs out a cigarette, turns down a video on her phone and leads me down a short corridor to a small, white, concrete room. It’s warm and sparse: a mirror, black plastic mattress, antiseptic hygiene gel, alarm and fluffy slippers.

Kristina has been working in the red light district for a decade. She was persuaded to come by a Hungarian friend who had found her fortune in Amsterdam’s seedy sex industry.

“I’m saving for my two kids. For their future. They’re with my mother in Hungary. My kids don’t know what I do.”

Kristina has no desire to move. She attracts good business here, despite the irritating sightseers.

She speaks fluent Dutch and tells me she doesn’t have a pimp – she sells her body because “it’s easy money”.

And she feels safe here.

Mayor Halsema has mooted the idea of issuing permits for prostitutes to operate beyond the claustrophobic red light zone.

But many of those with connections to the sex trade worry it would push the women underground.

“Amsterdam is already known as the capital of prostitution,” says Karin Werkman, who works with victims of human trafficking.

“This would confirm that status. Prostitution will increase in private homes, in hotels. The women will be invisible.

“If you open up the rest of the city to function as a prostitution venue, it will attract other traffic to Amsterdam, with cars circulating, men harassing random women on the street to ask their price… and encourage human trafficking. Do not underestimate what that does to a city.”

More on this topic:

Previous efforts to clean up De Wallen – the red light district – included the council buying up brothels from king-pin pimps and offering cheap rents to start-ups and artists.

No-one seems to know exactly how many women work in the city’s sex industry. It’s described as a “dark number”.

“Amsterdam says everything is under control, but we don’t even know how many girls are working here,” Frits Rouvoet points out.

“Some researchers say 4,000, others say 8,000. Some say 10% are trafficked, others say 90%. Even with that lowest figure, 400 girls are selling sex against their will. They are essentially raped every day. It will not help to make them disappear elsewhere in the city.”

Mayor Halsema is expected to publish her detailed proposals later this year.

She has suggested an increased police presence, on-the-spot tourist fines and the use of “Code Red” – an emergency warning – to divert visitors when the historic hub gets too overcrowded.

Amsterdam Ombudsman Arre Zuurmond described it as “a jungle at night”. He wants to introduce an age limit and has proposed limiting the number of cheap flights to Schiphol airport.

Others argue the very existence of a legal sex zone fundamentally objectifies women and leaves them open to abuse.

“Deep down, we all know that prostitution is harmful to women, physically and emotionally, to have sex with strangers,” says Karin Werkman. She argues that facilitating the sex business – requiring the women to register and pay taxes – essentially makes the government the pimp.

The council’s current priority appears to be to protect the prostitutes’ trade.

Many of the windows already have “Te Huur” (for rent) signs displayed. The business is shifting online. Sex-for-sale websites allow women to solicit their services without having to brave public scrutiny.

If the red light district is a jungle, it is even more lawless online.