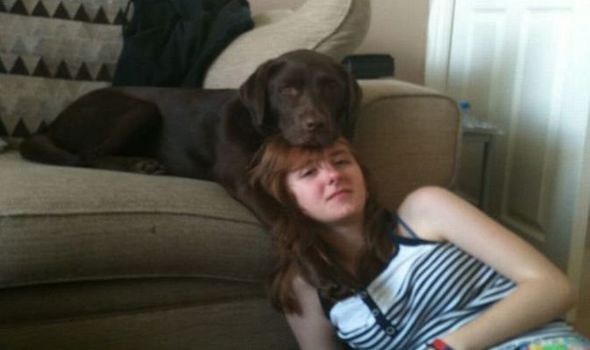 Gemma Redmond, 27, from Newport, was just a teenager when chocolate labrador Koko alerted her family that she was having a severe asthma attack in the middle of the night. Koko also helped her owner overcome clinical depression and stopped her from taking her own life.

Gemma, who works as a vet, told WalesOnline: “I had Koko since she was nine weeks old, and she was my companion through some dark times.

“Whenever I had suicidal thoughts she would suddenly be there, as though she knew what was going on in my head and wanted to prevent anything bad from happening to me.”

As a result, she and Koko would become inseparable. But tragedy struck when she started showing signs of pet dementia, a condition very similar to human Alzheimer’s disease.

Gemma continued: “In February 2020, I saw she wasn’t being her normal self. Koko was walking in circles and only managing to settle down briefly before pacing around again.

“She would have a glazed look in her eyes and would stand in the garden or the house as though trying to make sense of where she was and what she was doing.”

Gemma’s vet colleagues were quick to spot the early signs of dementia and she adjusted her lifestyle to help Koko cope.

She tried to make each day as similar as possible, and lockdown meant she could keep things very limited and maintain a simple routine.

Nevertheless, there was ultimately very little she could do to save Koko, and as the months went by, she became increasingly affected by the disease.

As her condition worsened, Koko began to sleep a lot, looked confused nearly all the time, began going to the toilet in the house and completely lost her once bubbly personality.

Gemma said: “It was utterly heartbreaking for me and my family. I’ll never forget Koko, but she is in a better place now and has left us with so many happy memories that can never be taken away.

Dementia in pets is devastating to see, but according to Vets4Pets, 85 percent of cases go undiagnosed.

To try and reduce this number, the organisation has developed an online symptom checker for those worried about their pets having dementia – to find out more click here.

Royal Family rift: Queen ‘constantly frustrated’ with Prince Charles and ‘puzzled by him’