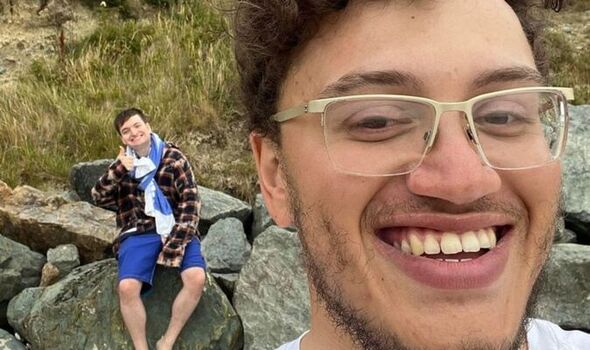 Darnell Cordingley, 26, has sadly died after being struck by a falling tree in Sale, Greater Manchester. His long-time friend, Sam Smart, was also there at the time and was left with serious injuries from the tragic event last Thursday (October 9).

A fundraiser has now been set up in Darnell’s name and tributes have poured in for the young man.

Sam, who witnessed the horrifying incident, was left with serious injuries including multiple broken bones and a fractured vertebrae.

The two friends had met for a catch-up, walking near the canal, when they helped a woman who had had an accident on her bike.

The pair called an ambulance for the woman but just as they were leaving, the tree fell down striking the two men.

Sam has paid tribute to his old friend from his hospital.

He said: “Darnell was goofy, random, funny, and will always be my closest friend. Whenever he was grumpy I liked to call him Grumpy Grandad because he’d look like a grandad.

“We loved making videos together as kids, it was fun to edit them and look back at them as we got older. All of us had a love of silly film making and look forward to seeing them all again soon.

“I’m still processing that Darnell is gone. There was a moment in the hospital where I thought that I needed to tell him how I was and what happened but would remember that he’s no longer here.

“This will take me a long time to process and I don’t think I’ll ever get over it. He was like my brother, my best friend. Hannah and I keep saying that he will still be the best man at our wedding when we decide to tie the knot in the future.”

The pair met on a school trip to the Lake District in Year Nine and had remained friends all these years later.

On the fateful day, the two young men met up during Darnell’s shift as a traffic warden.

Sam described the incident: “I met Darnell during his shift as a traffic warden to catch-up and have a walk, we were going down the canal when a woman had an accident with her bike so we attended to her and called for an ambulance. We went to walk up a street to see something when the tree fell.

“I have three breaks in my left ankle and a column/vertebrae in my lower spine is fractured. At the moment we’re waiting to hear from the spinal team if my fracture is safe in just a back brace and will then move onto my ankle.

“It will need bolts and plates put in. Ever since the accident my girlfriend, Hannah, has been by my side and I’ve been extremely fortunate that the hospital has been allowing her to stay with me through it all. I wouldn’t be able to do this without her or all my friends who have been keeping me company.”

“He just wanted to help people, he was always a happy, cheery, positive person. He was the apple of my eye, my world, and my strength. He was a really good son, loving, loyal, always there for us both and always took care of his sister, we’re going to miss him very much.

“Myself and my daughter are absolutely devastated, it’s always been us three against the world and nothing can fill the void that’s been left in our lives. There’s nothing that can fill this emptiness. It’s just tragic, it shouldn’t have happened to him. He had a happy and caring soul and always wanted the best for everyone. He could brighten up any room.”