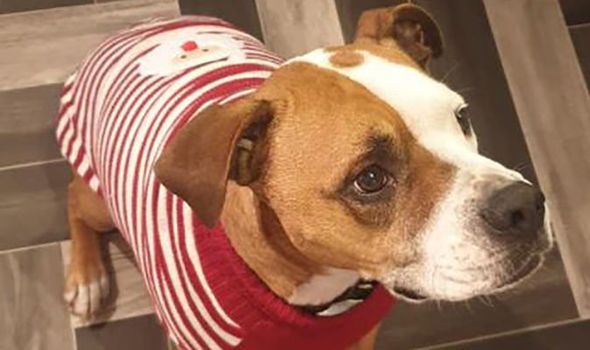 Trev, a nine-year-old Boxer cross, was so frightened by a series of loud bangs on Bonfire Night he broke through a downstairs window and ran away. His owners, Arieann and Lee Borstal, had left the rescue dog secure at home while they briefly went to pick up a relative.

But they returned to find Trev missing and spent the following days searching for the dog.

They received the distressing news the pooch’s lifeless body had been spotted on nearby railway tracks, reports Wales Online.

Arieann’s father had to identify the body.

Arieann, 35, said: “We were only out of the house about 45 minutes. It was all quiet when we left and Trev was completely calm.

“He was our world and the kids are heartbroken, especially Charlie who’s seven. He’s never known life without Trev in it.

“He became such a loving, soppy boy, a big baby really.

“It must have started getting really noisy because we came back to find paw prints up the walls and the window forced open.

“He must have been so scared.”

A train had collided with Trev on lines near Chepstow, south Wales.

Arieann, who is a senior retail manager, added: “A train driver posted on our local Facebook community page that he’d spotted a dog’s body on the tracks not far from where we live.

“So I went to the local station and had to get one of the staff members to retrieve Trev for me because I wasn’t allowed on the tracks.

“My dad had to identify him and then we took him home.”

Rescued from a local shelter when he was only a year-old Trev had endured a rough start to life.

“He was petrified of everyone initially – God knows what he’d been through as a pup,” mum-of-two Arieann said.

Neighbours in Chepstow have since supported the grieving family.

But Arieann believes more should be done to prevent the use of fireworks.

The mum continued: “So many people turned out to help us search. They gave us so much support and displayed such kindness. We’ll never forget that.

“More recently, they’ve also been taking down all the ‘missing’ posters we put up around Chepstow in our hunt for Trev, because neither Lee or I could face doing it ourselves.

“You can buy silent fireworks, so why can’t they all be noiseless?

“How many more people have to watch their pets suffer or lose them altogether? There’s just no need for it.”

COVID-19: Thousands of people ‘including some as young as 17’ turn up for walk-in jabs in variant hotspot areas

The police needs to look at misogyny in their ranks