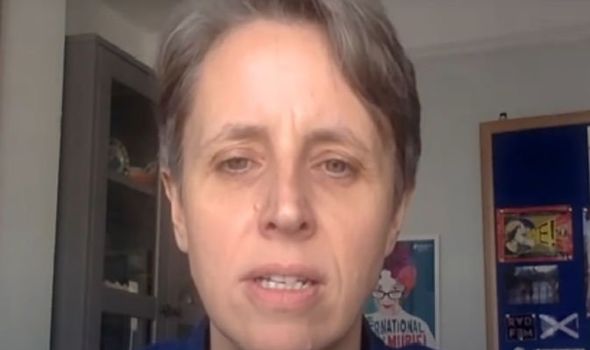 Professor Kathleen Stock endured calls to be fired and had posters created with a banner displaying the phrase “Stock Out” following the dispute. The philosophy academic at University of Sussex had said she believed gender identity is not more important than facts about biological sex “particularly when it comes to law and policy”.

But an anonymous group, reportedly set up by students, reacted with ire and demanded she was fired from her role.

The lecturer said she and her family have since suffered “intimidation” during the “absolutely horrible time”.

Prof Stock previously accused the Sussex branch of the University and College Union (UCU) of “effectively ending her career” after they issued a statement supporting a “strong stance” against any accusations of transphobia.

However, the university, which caters for around 20,000 students, always maintained it would “not tolerate threats to cherished academic freedoms.”

Speaking on Twitter today, Prof Stock said: “This has been a very difficult few years but the leadership’s approach more recently has been admirable and decent.

“I hope that other institutions in similar situations can learn from this.

“I am particularly glad to see the University emphasising that bullying and harassment anyone for their legally held beliefs is unacceptable in their workplace.

“This has been an absolutely horrible time for me and my family – I’m putting it behind me now – on to brighter things soon, I hope.”

The professional, who received an OBE in January, said she would not comment further on the issue until next week but did thank her lawyers who helped her through the ordeal.

Adam Tickell, the University of Sussex Vice Chancellor, said: “We had hoped that Professor Stock would feel able to return to work, and we would have supported her to do so.

“She has decided that recent events have meant that this will not be possible, and we respect and understand that decision.

“We will miss her many contributions, from which the University has benefited during her time here.

“When we published our congratulations to Professor Stock for being awarded an OBE in January this year, I mentioned how her work has its supporters and detractors – rigorous academic challenge is welcome.

“However, we have seen an intolerance of her as a member of our community because of her work. This is now – and will always be – in direct opposition to even the most basic principles of academia.

“I would like to make it very clear that it is unlawful to discriminate against someone on the grounds of sex and of philosophical belief -her departure is a loss to us all.

The university consistently supported the professor, defending her “academic freedoms” and explaining it would not let any member of staff be intimidated or harassed.

Speaking previously, it said: “We are investigating activity on our campus which appears to have been designed to attack Professor Kathleen Stock for exercising her academic freedoms.

“Disturbingly, this has included pressuring the university to terminate her employment.

“Everyone at the university has the right to be free from harassment and intimidation.

“We cannot and will not tolerate threats to cherished academic freedoms and will take any action necessary to protect the rights of our community.”