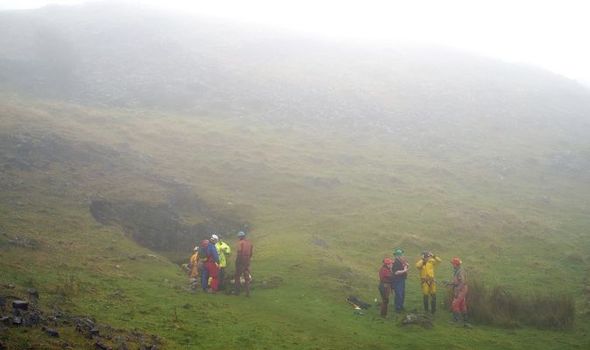 George Linnane, 38, is recovering in hospital after a boulder fell on him breaking his jaw, ribs and leg in caves 900 feet below the Brecon Beacons in SouthWales. His mother Sally Linnane-Hemmens said the tense wait in the 54-hour rescue, the longest in British caving history, had been “horrendous”. She has now set up a web page to raise money for the South & Mid-Wales Cave Rescue Team. Sally, from Titchfield, Hampshire, wrote: “These guys, along with several rescue teams from across the UK, saved my son’s life.”

A friend described him as a “hard as nails” caver, adding: “George is very experienced. He’s known in the caving world for being a reliable guy. He doesn’t take risks. Throughout the rescue George was very stoic, that’s the kind of person he is.

“He’s got a huge amount of experience in cave exploration and has qualified as an underground diver as well.” George from

Bradley Stoke, near Bristol, and friends had planned to spend Saturday underground.

But disaster struck when a large boulder came loose as George and pals stood on an underground ledge. He fell 50ft and was left in agony when the rock landed on him.

Rescuers had to swim through an underground stream, supporting George on a floating stretcher. He was lifted 90ft through a vertical chasm with the stretcher on ropes to avoid a tricky narrow section.

They are nearly 1,000ft deep, making them the most cavernous in the UK. George’s friend Michael Thomas spent 12 hours underground with him as part of the rescue team.

Michael, from Farnham, Surrey, told a friend on Facebook: “The first thing he got from me was stick, making me go down [the] entrance to reach him.”

George was eventually pulled out on Monday night to claps and cheers and taken to hospital in Cardiff with multiple fractures that require several operations.