Rail services have been disrupted in parts of the UK after forecasters warned of “treacherous” conditions following intense rainfall and flooding.

Weather warnings are in place for Scotland, North Wales, and the North East and North West in England – and more than 90 flood warnings and alerts are in place across England. 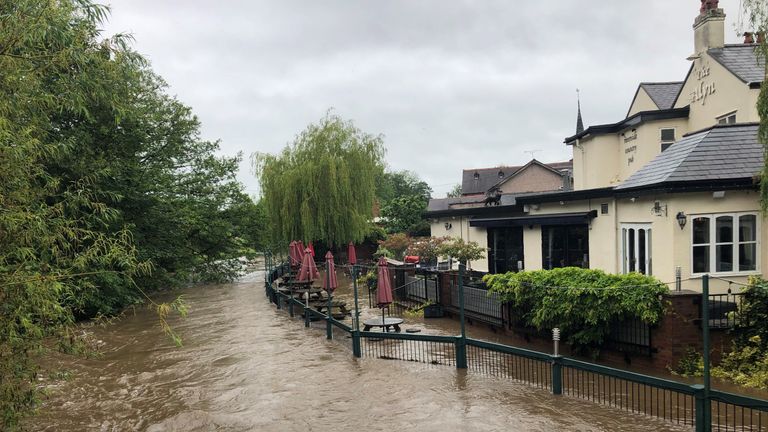 In one area in the West Midlands, train tracks have been transformed into waterways.

Lines between Stratford-upon-Avon and Whitlock End have been blocked after severe flooding.

East Midlands Trains has tweeted to say there has been heavy flooding on the tracks between Boston and Skegness in Lincolnshire and that its service is now expected to be suspended until Saturday morning.

Lines were also blocked near Uttoxeter after a train hit part of a tree on the track around 7am on Thursday.

East Midlands Trains said it caused disruption to its services on the Derby/Crewe route but there was no major damage and no one was injured.

Lincolnshire Fire and Rescue said nearly half of its call-outs overnight were related to the weather, with 31 of 71 calls to the service coming from people concerned about floodwater.

The bad weather has also affected sporting events, with the start of India’s Cricket World Cup clash against New Zealand in Nottingham delayed.

On Wednesday night, a number of people needed rescuing from cars caught in floodwater in Nottingham and Warwickshire.

Nottingham City Transport tweeted: “So far tonight in Nottingham 18 people have had to be rescued by emergency services after getting stuck driving through flood water.”

The Met Office said Chillingham in Northumberland saw nearly 1cm of rainfall in the space of an hour on Thursday morning. The village had seen 7.3cm of rainfall over a 28-hour period – more than the 6cm average for the whole of June.

Elsewhere, Waddington in Lincolnshire saw nearly 4cm fall over a period of 14 hours, while over the same period Coleshill in Warwickshire saw 3cm fall and 3cm was seen at Astwood Bank in Worcestershire.

Environment Agency officials put up flood barriers in Northwich, Cheshire, amid concerns over the level of the River Weaver. This week has seen showers and thunderstorms in southern and eastern parts of England, with a persistent band of rain edging north and west as the week has continued.

North Wales Police tweeted: “Assess the need for your journey, drive to the conditions and your driving ability. Please DO NOT ignore any road closure signs. Think safety.” 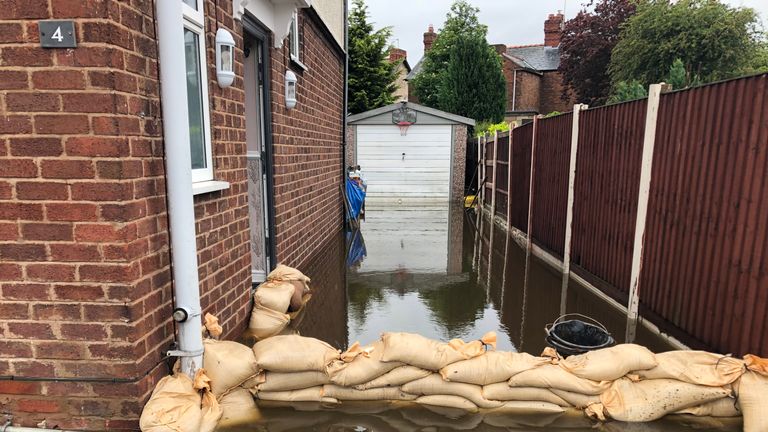 Transport for Wales tweeted: “Continued heavy rain during today means that travel to and from your desired destination cannot be guaranteed.”

The lines between Shrewsbury and Chester and Crewe and Chester were closed, while a burst water main flooded the railway between Petts Wood and Orpington in London.

In Aberdeen, Scotland, an outdoor Rod Stewart concert was cancelled “due to adverse weather conditions”.

Met Office meteorologist Luke Miall warned that the wet weather would continue to blight parts of the country.

He said: “As this system pushes up from the South East through the course of the night, it will re-intensify and continue through much of Thursday.” Mr Miall said parts of southeast Scotland could see up to 10cm of rain, with an amber alert in place warning of heavy downpours.

The wettest June for the UK was in 2012 when an average of 14.9cm of rain fell but Mr Miall said this month’s rainfall was “still a long way off” breaking that record.

No Met Office weather warnings are in place at for Friday and the weekend.