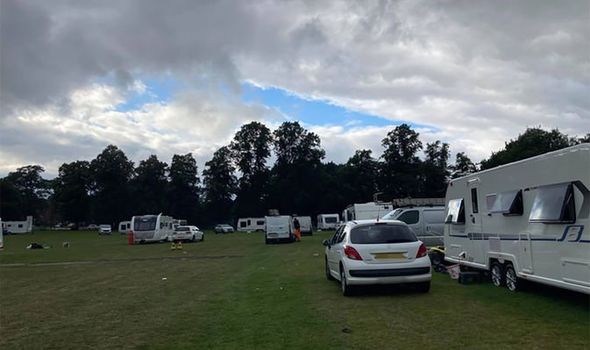 Families with children in more than 20 caravans piled onto Highfields Park in Dunkirk, Nottingham, on Tuesday, so landowner The University of Nottingham quickly served the travellers with an eviction notice.

But the travellers have today slammed the decision, telling Nottinghamshire Live they “get so much hate”.

Irish traveller Marie Devaney, who is a mum to an 11-year-old boy, said: “It feels like we are all being painted with the same brush.

“They do not know us. We get so much hate, we have been called all sorts of names.

“People are racist, and think the worst of us without even knowing us.”

The 30-year-old woman, who arrived with her family, added: “We have got nowhere to go.

“We should be given land to camp on – this is our lifestyle. We have done this our whole life.”

George Freeman, 27, said he is “the man of the land and freedom” and people should be more “accepting”.

The traveller continued: “It just seems suspicious that everywhere we go suddenly there is a rise in crime and anti-social behaviour.

“Have they got any proof? Why are they telling us to leave?

George, who had his first child when he was 15, said he is looking forward to achieving his dream of creating his own football team.

He now has seven children, and said he is trying for another one until December.

He added: “I want to have eleven children, to build my own football team and call it the ‘Travelling League’ – that is my dream.”

Besides his ambitious family plans, George said he would never quit his nomad life, and that people should be more “understanding”.

He added: “We will never change and people should know that by now. We are free, we live in nature.

“If they want us to follow the rules, they should give us land to camp on.

“They judge us but our families have been doing the same thing for ages – it is just not fair.”

Tina Ward, another traveller on the site, said: “It seems that is easier to blame travellers for anything that happens in the city.

“We only came here yesterday and we have already been told to leave.”

The 30-year-old mum, originally from Ireland, added: “Everything that we do is wrong, and everything that is bad we get the blame for it.”

Dunkirk is a residential area of Nottingham, close to the university and various entertainment and shopping areas.

It is popular with families and young professionals.