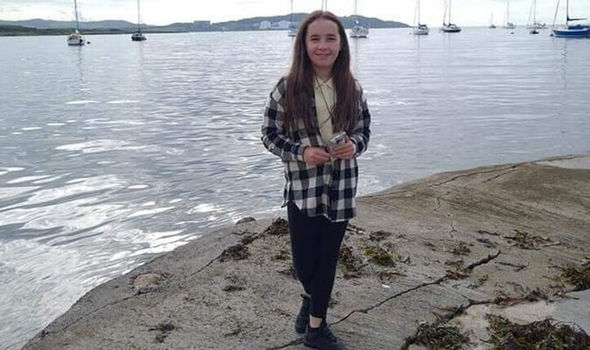 Gemma Caffrey, who died last week, has been described by headteacher Skayne Dodds as “kind and thoughtful”. The pupil, in her second year at Calderside Academy in Blantyre, Glasgow, was “hard-working” and “respectful”, Mr Dodds said in an online tribute.

Gemma “enjoyed school life with her group of close friends”, he added.

Parents also paid tribute to Gemma on social media, sending condolences to her heartbroken parents, Graeme and Alison, according to the Daily Record.

She had moved to secondary school last year from Townhill Primary School.

Mr Dodds led the online messages, posting: “The whole of the Calderside School Community is saddened by the passing of Gemma Caffrey.

“Gemma was a lovely, kind and thoughtful girl.

“She was a hard-working, respectful pupil, who enjoyed school life with her group of close friends.

“Gemma’s passing has had a profound effect on the school community and has created a great sense of loss.

“She will always have a place in the hearts of the staff and pupils who knew her.

“She will be sorely missed.

“The thoughts of the pupils, staff and parents of the Calderside Community are with her family at this sad time.”

Others described Gemma as “beautiful” and “gorgeous”.

Gemma’s mother Alison took to social media this week to thank those who had sent messages of condolence and support.

She praised Calderside Academy as having been “very supportive”, noting that the children in Gemma’s year would get the support they needed.

Royal POLL: Should Prince Harry and Prince William make up and put feud behind them? VOTE