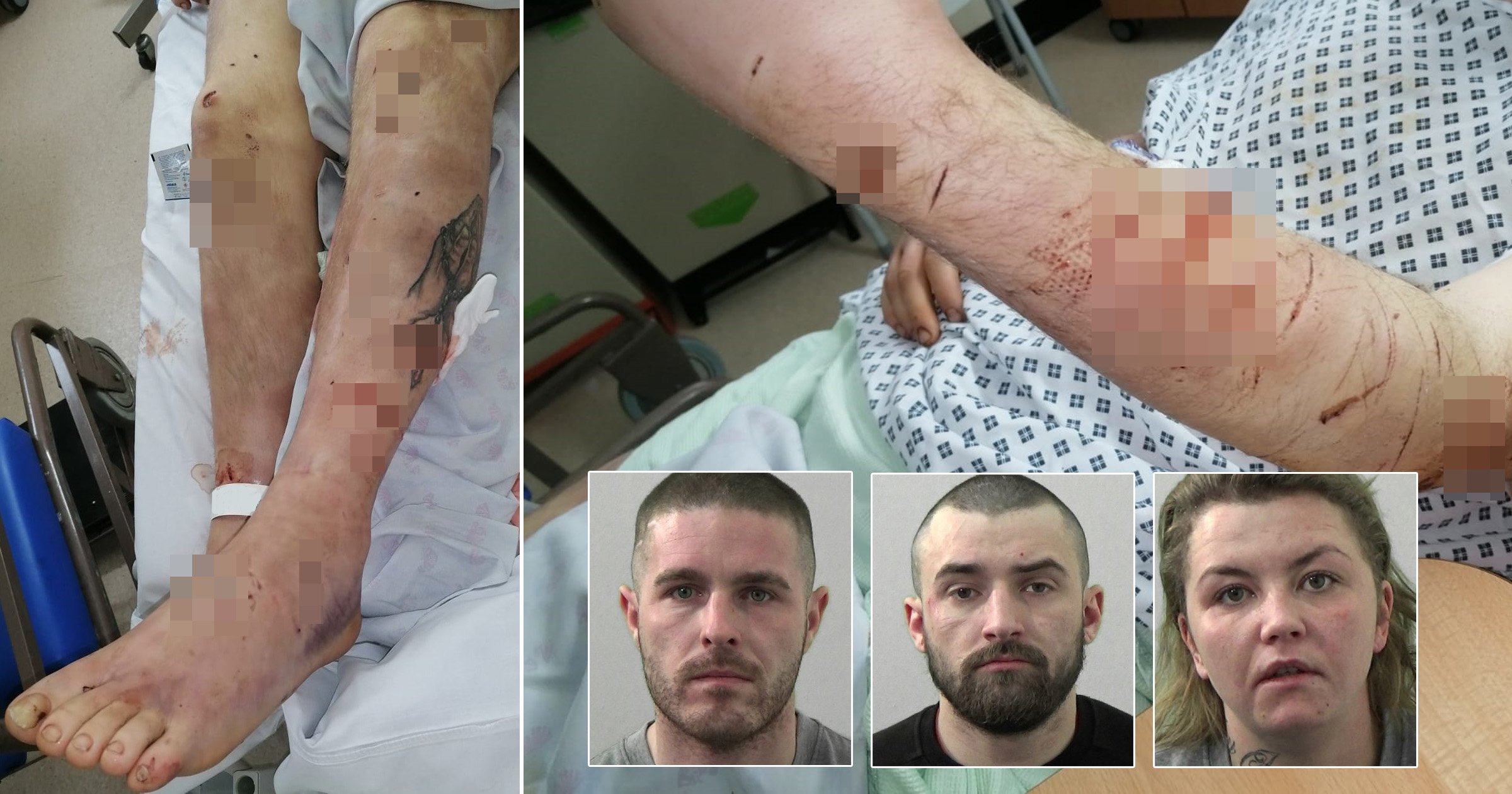 Three thugs who tortured a football coach and carved ‘nonce’ into his back will spend even longer behind bars after the government stepped in.

The gruesome trio were jailed for subjecting Jordan Storey to a six hour ordeal, during which they set his hands and head alight and burned him with cigarettes.

He was tied up and attacked with a range of weapons including a wine bottle, sledgehammer, axe, knives, a dumbbell bar, pliers and a dog chain.

The dad was convinced he was going to be murdered and listened to his attackers discuss how they planned to dispose of his body on the beach.

He convinced his tormentors that they’d be caught if they went through with it so they planned to falsely accuse him of rape instead.

Storey, 28, was held hostage in a flat and told he wasn’t leaving until his wounds had healed so the gang could cover up the degrading assault.

The attack, some of which was recorded and put online, left the victim suffering kidney failure and ‘serious psychological harm’.

Rebecca McNally, 29, Jamie John Barker, 28, and Lewis Collier Herman, 25, were all drunk and high on on MDMA during the torture session in Whitley Bay, North Tyneside.

At the original court hearing, it was revealed a confrontation between Storey and Barker broke out on Feburary 21, 2020.

Storey’s friend of 10 years, Chelsea Wilson-Ford, 23, claimed that Barker had assaulted her.

At some point in the night the group turned on Storey – including Wilson-Ford – and decided to take revenge, tying him to a plastic chair and removing teeth and nails with pliers.

Speaking at the original court hearing, Storey, who previously worked as a coach for Newcastle United, said: ‘I genuinely thought they were going to kill me, I had accepted this was the end for me.’

In a statement, he continued: ‘Instead of killing me they decided to scar me for life and carve “nonce” in big letters onto my back and degrade me for life while I was strapped to the chair.

‘The footage was shared with almost everyone in my local area and my friends and family have viewed how I was tortured.

‘The humiliation is beyond description. Being tortured was horrific.’

Police officers discovered the victim, whose skin had turned yellow, lying on a mattress in the bloodstained property when they visited for an unrelated matter at 3.50am on February 23.

Now the Government has intervened to make sure three of the four aggressors are locked up for longer.

McNally, Barker and Herman all originally pleaded guilty to one count of causing grievous bodily harm with intent.

On February 24 at Worcester Crown Court, McNally was sentenced to nine years behind bars while Barker and Herman both received 10 years and three months.

But the Solicitor General, the Rt Hon Lucy Frazer QC MP, took the case to the Court of Appeal and argued the sentences were ‘unduly lenient’.

Wilson-Ford, who was imprisoned for two years for her role, did not have her sentence increased.

After the hearing the Solicitor General said: ‘The actions of the offenders in this case were truly horrific, mentally and physically torturing the victim for hours.

‘The impact on the victim is substantial and it is right for the sentences to reflect this and the risk they pose to the public.

‘I hope that today’s decision will bring the victim some solace.’

Brexit Is Finally Done, but It Already Seems Out of Date