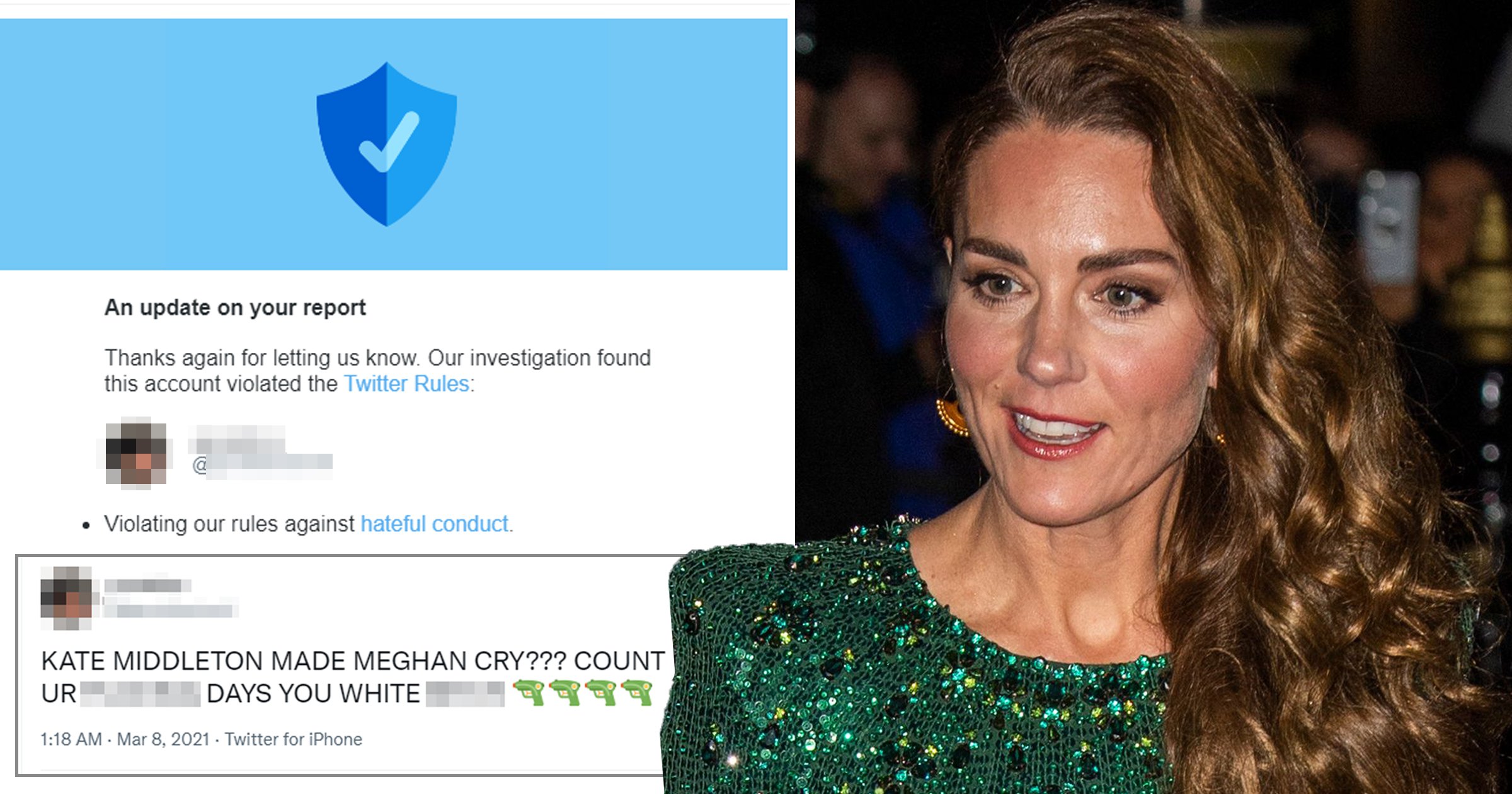 A troll who abused Kate Middleton after Prince Harry and Meghan Markle’s Oprah interview has been allowed to stay on Twitter despite posting ‘hateful’ content.

The platform took nine months to investigate but did not remove the spiteful material, including a racial slur, or the profile responsible.

The abusive post was first reported in March 2021 after the couple opened up on the Oprah Winfrey special about their royal lives in the highly intimate and divisive chat.

The message told the Duchess of Cambridge to ‘count ur f****** days’ and included a racial slur and gun emojis.

The investigation by Twitter found last week that the account, under a pseudonym, had violated rules against hateful conduct.

However, the original message and the profile were still online today.

Online security expert Philip Grindell, of Defuse, a threat and intelligence consultancy, told Metro.co.uk: ‘In this instance there has clearly been an unacceptable delay between reporting and response.

‘The fact that Twitter has identified the content but not confirmed whether it’s been taken down or not makes a mockery of the reporting system.

‘Twitter is sending the message that it’s okay to have unacceptable content up there for months on end and even when they report back nine months later, they don’t do anything about it.

‘When they’re informing you that it’s breaching their own policies but then fail to take action, it doesn’t do anything for trust in the ability of Twitter to manage its complaints process.

‘The question is, would you report this again?

‘The response doesn’t exactly encourage people to report such content in line with Twitter’s standards and behaviour.’

The Duchess of Cambridge, 39, was trolled after Meghan told on the two-hour special how they had clashed before her wedding to Prince Harry.

Her account ran contrary to claims that she made Kate cry at a bridesmaid’s dress fitting for her sister-in-law’s daughter Princess Charlotte in 2018.

The Duchess of Sussex, 40, said that it was she who was reduced to tears and this was ‘the beginning of real character assassination’, with Buckingham Palace doing nothing to set the record straight.

She told the chat show queen that Kate later ‘owned it’ and ‘apologised’ to her, giving her some flowers and a note.

While Kate’s version of events has not been made public, a barrage of online abuse was then directed at her on Twitter.

The trolling appeared to emanate from fans of Meghan outraged that Kate was said to have made her cry.

However, some Twitter users defended Kate after spotting the abuse.

Kay wrote: ‘Why blame Kate for everything that Meghan has gone through? It’s not Kate’s fault. Disgusting.’

At the time, Buckingham Palace responded to the interview with a statement on behalf of the Queen, which said: ‘The issues raised, particularly that of race, are concerning.

‘While some recollections may vary, they are taken very seriously and will be addressed by the family privately.’

Twitter has a ‘hateful conduct policy’ that includes combating racism and a ‘zero tolerance’ stance on violent threats.

Consequences are based on ‘the severity of the violation and an individual’s previous record of rule violations’.

They can include suspending accounts, downranking tweets in replies and asking a user to remove the content.

Back to school: Everything parents need to know – new term Covid rules for pupils