Donald Trump has dropped the heaviest hint yet he is considering a comeback, telling adoring fans he will ‘very, very, very probably’ run in the next presidential election.

At a rally in Iowa on Thursday night, Trump all but confirmed he will launch a third bid for the White House later this month.

He told cheering supporters: ‘In order to make our country successful and safe and glorious, I will very, very, very probably do it again, okay.’

Trump then continued to say ‘very, very probably’ whilst the crowd applauded.

This is the closest he has come to throwing his hat in the ring.

But his candidacy depends on how the Republican party fares in the upcoming mid-term elections.

Current polling suggests that the GOP will come out on top in a ‘red wave’, taking back control of both the Senate and the House of Representatives. 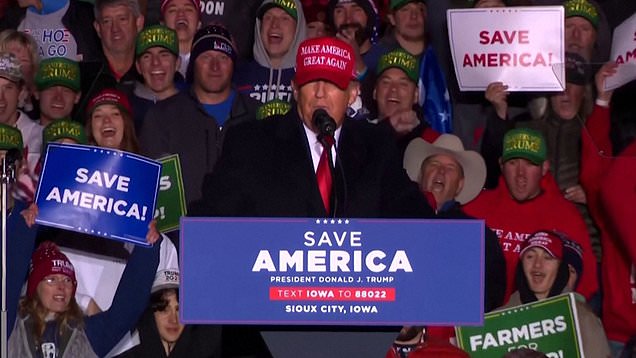 Joe Biden’s approval rating is currently sat at 40%, which is the lowest rating any president has had halfway through their term.

The former president’s inner circle is debating whether he will announce his campaign on November 14, which would alloy him to launch off the back of the party’s expected midterm success.

But he is said to be considering making it official much earlier, to get ahead of potential rivals such as Florida Governor Ron DeSantis.

Kellyanne Conway, Trump’s campaign manager in the 2016 election and his current adviser, said: ‘He would like to have declared it already.

‘I give him a ton of credit for not stepping in the way of the midterm candidates.

‘That was certainly my advice from the beginning, wait until after the midterms. I think you can expect him to announce soon.’