Home » Europe » Trump Wants to Make it Hard to Get Asylum. Other Countries Feel the Same.

LONDON — President Trump’s promise to stop a caravan of Central American migrants from reaching the United States border, if necessary through military force, might seem like just another effort by the president to unilaterally dismantle international laws and accepted practices.

But there is one important difference between this and Mr. Trump’s go-it-alone defiance of climate change agreements, trade deals or arms control treaties. In attacking the long accepted means of protecting refugees and upholding stability in times of mass displacement, he’s got company. Lots and lots of company.

There is no shortage of countries that also skirt, and therefore undermine, global refugee rules. The European Union and Australia are two of the biggest offenders. Peru and Ecuador are restricting Venezuelan refugees, while Tanzania is working to push out Burundians. 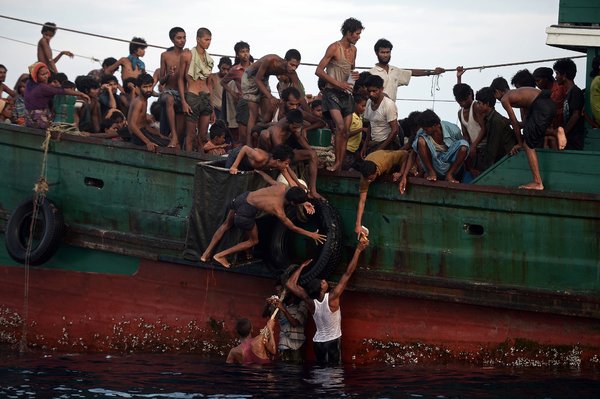 In 2015, as Rohingya refugees fled Myanmar on overcrowded boats, the governments of Indonesia, Malaysia and Thailand — in a move that might make even Mr. Trump blush — pushed the boats out to sea, stranding them, to prevent them from reaching safe shores.

Still, countries tend to hide their violations by presenting themselves as following the letter of the law, or by dressing up anti-refugee measures in humanitarian terms. But Mr. Trump is selling his harsh treatment of asylum-seekers as deliberate. And even if he is not the first to breach the rules, he is contributing to their breakdown in ways that could have global consequences.

“The more brazen you get, like Trump, and the more frequent you get, you can easily imagine a norm being completely torn down,” said Stephanie Schwartz, a migration expert at the University of Pennsylvania, who added that Mr. Trump was “taking an ax” to “one of the strongest norms we’ve got in international law” — the right of a refugee to seek asylum.

To consider how that would happen and what it would mean, it helps to understand the basics of asylum and how Mr. Trump fits into its erosion.

How Asylum Is Meant to Work

The basic principle is straightforward.

If you make it to the border of a foreign country, you have a right to request asylum. That country is obligated to hear and evaluate your claim. It cannot kick you out while it’s processing you — which can take months or years — or if you face a credible threat of persecution at home. If the country finds you meet the definition of a refugee, it is obligated to shelter you. If you don’t, only then can it expel you.

These rights came out of World War II, which created huge numbers of refugees in Europe. The war’s victors spent much of the next decade setting up what became the international order, enshrined in laws that regulate things like warfare or that establish universal rights.

Protection for refugees made the list because it was an urgent issue at the time and because it was seen as a way to uphold stability and basic rights amid any future humanitarian crises.

And after the United States and others had turned away Jewish refugees during the Holocaust, the world felt compelled to promise “never again.”

Refugees’ rights became enshrined in international law through global agreements signed in 1951 and again in 1967, when the end of colonialism brought more crises.

Not all countries signed these pacts; the United States ratified only the 1967 agreement and several Middle Eastern and Asian countries signed neither. But they are considered to be to be so widely agreed upon that they constrain everyone.

Still, what makes asylum one of the world’s strongest norms is that it is written into the domestic laws of many countries, including the United States. After all, asylum is administered by domestic governments and courts.

This means that a leader like Mr. Trump cannot simply defy his obligations by ignoring or abdicating the 1967 agreement, for that would mean breaking American law.

But on the world stage there is no enforcement mechanism. There is nothing to stop a country from repealing its asylum laws or, if the leader can get away with it, ignoring them.

Countries have generally complied with this norm, because they want to be seen as responsible actors, or to avoid angering their neighbors or the United Nations. And even if countries might care little about refugees themselves, they know that they will benefit if everyone else complies.

Why the Asylum System Has Been Eroding

This system held up at least moderately well until the 1990s.

In retrospect, it has become clear that Western countries complied with refugee rules, and pushed other countries to do the same, less out of altruism than because of Cold War gamesmanship.

In the first few decades after World War II, many refugees came out of the communist bloc. For Western leaders and their allies, accepting the refugees, along with those from non-communist nations, was a way to position the West as morally and ideologically superior.

After the Soviet Union collapsed in 1991, Western nations became less interested in championing refugees. They looked for ways to cut corners on their obligations.

That year, the United States Coast Guard began interdicting boats of Haitians fleeing political turmoil at home. Rather then let the boats reach Florida, which would oblige the United States to grant the Haitians refugee protections, the Americans shipped many back to Haiti or diverted them for processing at the American military base in Guantánamo Bay.

This practice may have violated the spirit of refugee protections, but the Supreme Court ruled in 1993, by an 8-to-1 vote supported by the Clinton administration, that this complied with international and domestic law.

This loophole — a country can avoid its responsibilities toward refugees by forcibly preventing them from reaching its borders — has since become common practice among Western countries.

When that plan faltered, it avoided assisting boatloads of would-be migrants, even as hundreds died on the journey.

And now Mr. Trump has deployed thousands of troops to prevent a Honduran caravan from reaching the southern border.

Could the Asylum System Break?

This is already happening as Western countries continue to hold out rights and protections, and push burdens onto poorer countries that are less likely or able to protect refugees.

Despite European and American hand-wringing over the arrival of Syrian refugees in their countries, for instance, the vast majority reside in Jordan, Turkey and Lebanon.

Knowing that Western powers will look the other way, those countries feel less compelled to grant full protections, preventing refugees from working or restricting where they can live.

Or they might force refugees home before it is safe for them to return. And certainly they will prevent refugees from reaching European borders.

As a result what we have now isn’t a global refugee system so much as a loose network of occasionally and partially observed norms.

This means that there is no reliable process for relieving the political, social and economic pressures that sudden refugee influxes create. This creates dangers primarily for refugees but also for the governments that have deconstructed the system.

We have seen in Europe in the last few years just how significant the political impact can be.

And we should expect this to get worse. Scientists anticipate a near- and medium-term future in which climate change drives large population movements, either directly as people abandon areas rendered inhospitable by rising temperatures or extreme weather events, or indirectly as climate change exacerbates violence.

If asylum rights were declining even in the era of sunny 1990s global liberalism, it is hard to imagine their doing much better in the era of Donald J. Trump, Viktor Orban and Vladimir V. Putin.

“It takes a really, really long time to build these norms, especially when they restrict government actions in some way,” Ms. Schwartz said. “It’s so much easier to take them down.”

If that happens, the consequences will be most felt far away from the United States-Mexico border, in places like Honduras, Myanmar, Jordan or Burundi, where millions of people displaced by war or persecution will have to go without the protections once promised by a world that had agreed “never again.”

The Interpreter is a column by Max Fisher and Amanda Taub exploring the ideas and context behind major world events. Follow them on Twitter @Max_Fisher and @amandataub.

Royal revelation: What is the secret meaning behind the Queen’s handbags?