Crocodile blood and elephant tusks are among thousands of endangered animal products seized in a month-long operation at UK ports and airports.

Specially-trained UK Border Force officers took part in the international drive against wildlife criminals, who are responsible for a huge increase in the trade in rare animal and plant products.

The operation, led by Interpol and the World Customs Organisation, specifically focussed on the activities of criminal gangs in more than 100 countries, who feed off organised wildlife trafficking. As part of that effort, Border Force officers intensified their operations at sea ports and airports, making 178 separate seizures of items totalling thousands of products, banned under the Convention on International Trade in Endangered Species (CITES).

The reptile blood products are increasingly popular in Thailand and a number of other countries in the Far East, where some believe they are effective in preventing cancer.

Officers also seized a number of rare cactus plants. The cacti astrophytum asterias plants are native to a small number of states in the US and Mexico. 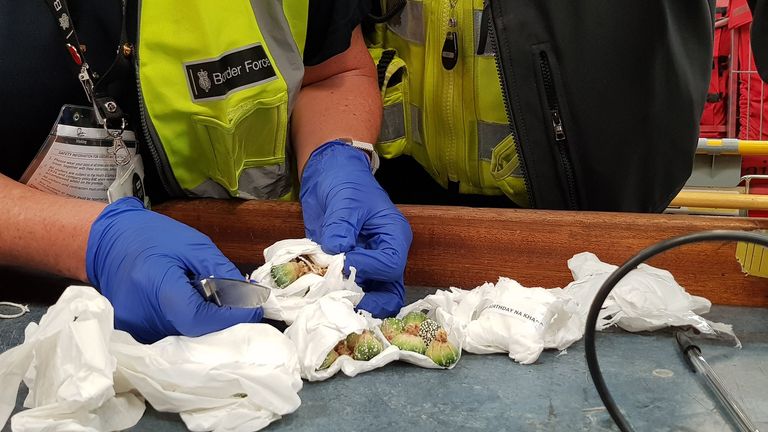 They are classed in the highest category of protected plant species and described as critically imperilled.

But despite this protection, illegal collection continues to threaten the future of this rare cactus.

Other items seized at the UK border included queen conch pearl, among the rarest type of pearl in the world. High quality specimens can fetch up to £15,000 per carat.

Despite a UK ban on the trade in ivory, Border Force agents still regularly recover ivory products at Britain’s ports and airports. 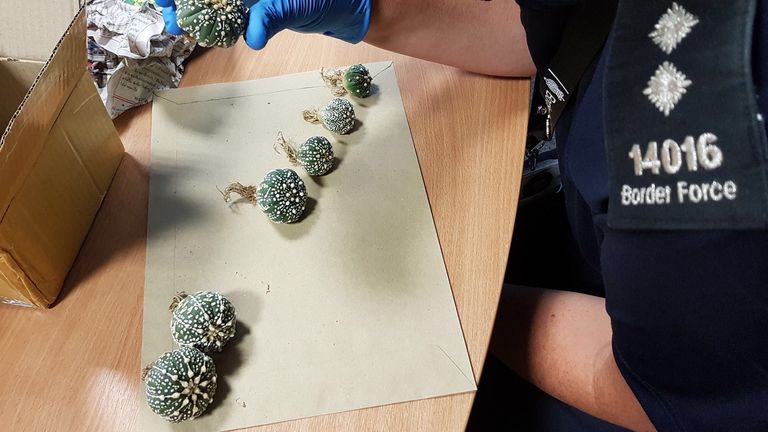 Elephant tusks, attached to wall mounting chains, were among the ivory products found during this latest operation.

The European Union has come under increasing pressure to follow the example of the UK and US in banning the trade in ivory products.

The international trade in those products was outlawed 30 years ago, but trade in antique ivory and shipments of personal effects for non-commercial purposes are still allowed and this loophole is being exploited by some traders within the EU. Conservationists have accused the EU of helping fuel the trade, which has seen a rise in elephant poaching in parts of Africa over the past decade, with around 20,000 elephants killed each year for their ivory.

Home Office Minister Chris Philip said the UK was proud to play a part in the latest international efforts to combat wildlife crime.

“The trade in endangered species is driven by organised crime groups and the movement of banned animal products is key to how they operate,” he said.

“This is why Border Force’s specialist officers will continue their vital work at the border to prevent the importation and exportation of endangered animals and plants, as well as working alongside enforcement partners such as the National Wildlife Crime Unit, and police from across the UK to eradicate this ruthless and exploitative trade.”

Codenamed Operation Thunder, the international drive against the trade in endangered animal and plant products led to the worldwide seizure of 1.3 tonnes of ivory, more than one tonne of pangolin scales, 1,400 live turtles and 1,800 reptiles.

Italy tops 1,000 daily coronavirus cases for first time since May