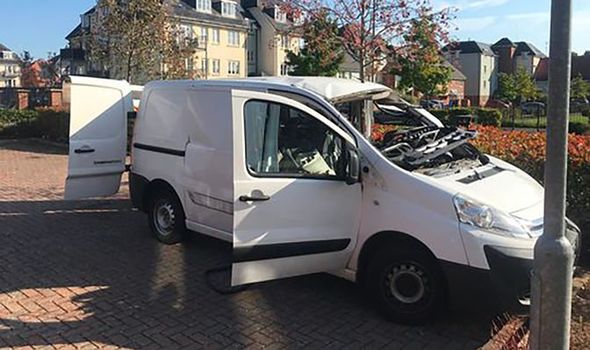 It is believed the blast in Aldershot, Hampshire, was a gas cylinder-induced explosion. At least two people were dashed to hospital after the emergency which is said to have happened at 7.50am.

Councillor Keith Dibble, who represents North Town for Rushmoor Borough Council, said a firefighter told him the van involved was from an oven cleaning company.

The councillor told Hampshire Live: “It was a gas cylinder induced explosion, not chemical. The cylinder had a leak within the oven cleaning van.

“A naked flame was introduced which resulted in a gas vapour cloud igniting.

“The van exploded outside at around 7.50 am. Two people rushed to hospital. Emergency services on site.

Glass has reportedly shattered on a green where children like to play on the North Town estate, just off the A331 in the commuter town.

One resident wrote on Facebook: “Hi guys, it was a van explosion. Lots of people came out to help which I can’t thank enough.

“If anyone is walking through white road be very careful of all the glass.

“Fire engine have made sure no further explosions happen. The injured person was my next door neighbour and has burns to her head, arms and chest I believe from what I saw. Well done again to those who also helped with towels and water.”

'Horrific and unbearable' – mother's grief as her son's killer is jailed

‘How are you going to pay for it?’ Labour grilled by BBC over ‘millions’ of boilers pledge