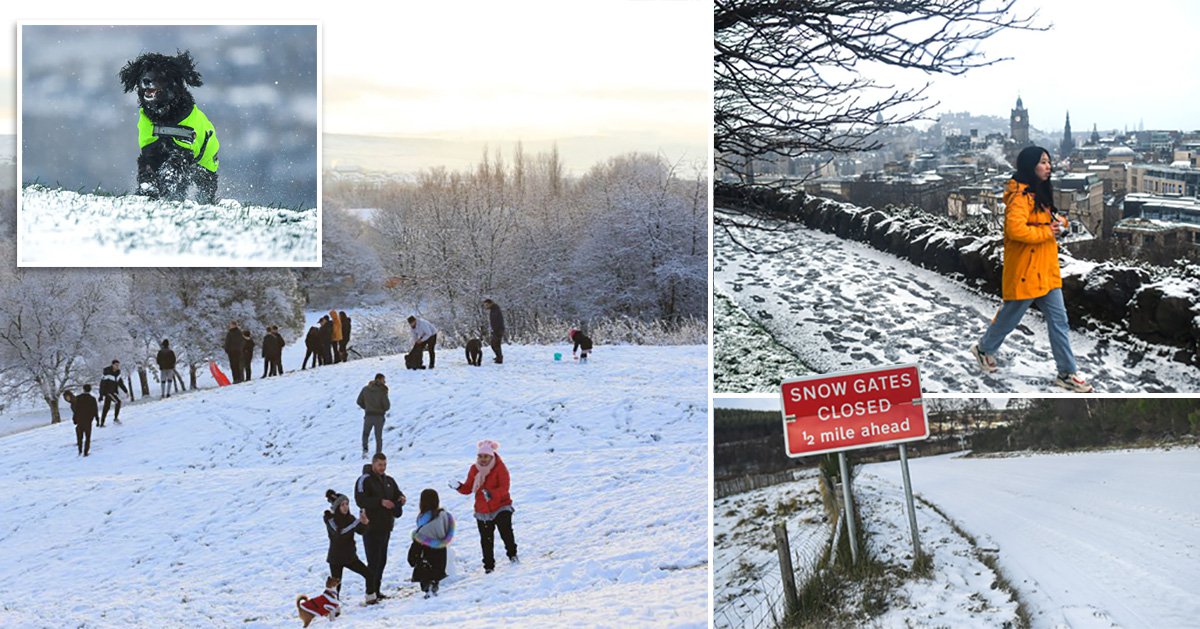 Snow, wind and rain is set to batter the UK as thousands of people face another weekend without power after deadly Storm Arwen.

Almost 5,000 homes across northern England and Scotland are still without supply in what MPs have branded a ‘national scandal’

On Saturday, Boris Johnson said he held calls with those leading the response to the storm after he was accused of ignoring the ‘freezing and forgotten’ north.

In a tweet, the prime minister said the government is ready to further support the recovery work ‘in any way we can’.

But there are fears another bout of bad weather will make that job more difficult, particularly in remote areas.

As work continues to restore power, forecasters predict temperatures will plummet to below 0C while snow could fall for the next five days and rain will hammer many parts of the UK.

A yellow warning for snow covering Scotland was in place on Saturday night while a yellow rain waning covering northern England was extended until Sunday.

It has also agreed with firms to lift the £700 cap on compensation which could be given to customers.

The change will allow those affected to claim £70 for each 12-hour period they are left without power, after an initial £70 for the first 48 hours.

Chief executive Jonathan Brearley told the BBC Radio 4 programme: ‘We are deeply concerned about customers who for over a week have been without power.

‘We want to establish the facts and make sure we understand what has happened, whether the network companies have met their obligations. If they haven’t, we will take enforcement action.

‘We have clear expectations of how fast they should get people back on the system.

‘We do recognise the challenging circumstances those companies are in. But what we expect from the network companies is to be relentless in connecting people, but also to be putting support in place.’

The Ministry of Defence said 297 personnel from the British Army and Royal Marines are supporting civil authorities and are conducting door-to-door checks on vulnerable people in their homes and providing reassurance to local communities.

It comes after heavy criticism from opposition MPs over the response to Storm Arwen, which left three people dead and inflicted some of the worst weather damage on communities in a generation.

Winds of 100mph caused electricity poles to snap and brought down wires across large swathes of the country. The Wye Valley, the Lake District, Aberdeenshire and Perthshire were among some of the worst-hit areas.

Ed Miliband, the shadow secretary for climate change, called for an urgent investigation ‘to understand what went wrongand to ensure that our power systems are never again this vulnerable to extreme weather event’.

He told the Guardian: ‘It is completely outrageous that thousands of people have been without power for over a week. People are being left in the most appalling circumstances but there has been an absence of government leadership.

‘Communities in the north with their power cut off are being treated like second-class citizens.’

Meanwhile Mary Foy, Labour MP for Durham City, said the response was a ‘national scandal’ which shone a spotlight on ‘the lack of preparedness’.

She said: ‘If this had happened in the home counties, the government would have sprung into action and the prime minister would have got on his wellies and visited immediately. People have been freezing in their homes and it has put people at risk. My constituents feel they have been forgotten and betrayed.’