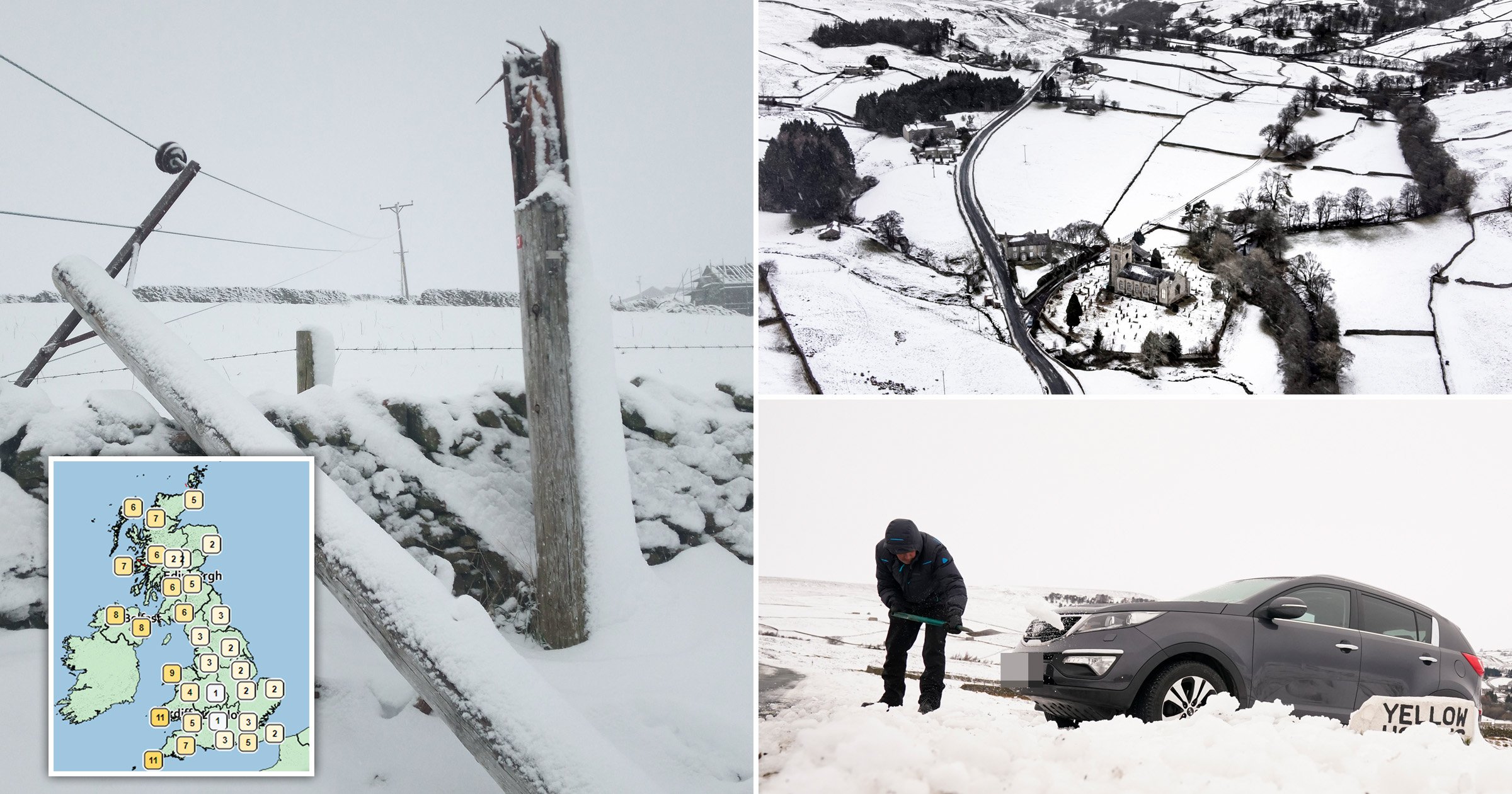 Freezing temperatures are expected to sweep the UK this weekend with snow in many areas – while thousands are still without heating due to Storm Arwen.

Snow is forecast in higher areas all the way from the Scottish Highlands to south-east England.

Temperatures are expexcted to remain well below 8C across the country, with lows of -6C in Scotland on Sunday and -2C in parts of Wales and the West Midlands on Saturday.

The frosty conditions spell yet more trouble for the 10,500 people in Scotland and northern England who have still not had their electricity restored after Storm Arwen knocked out swathes of the UK’s power infrastructure last Friday.

A man from Stanley in County Durham said he is using his dog as a ‘hot water bottle’ and that his wife is ‘like a shell of a person’ after being unable to sleep or wash properly for a week.

‘As we go into tonight we could see a bit of snow on the mountains in Scotland, but tomorrow we’re expecting wider snowfall from roughly the mountains of Wales northwards.

Roads will likely be affected in higher areas of northern Wales, the Peak District, the Pennines, as well as the Southern Uplands, Highlands and Grampians in Scotland.

Mr Petagna continued: ‘Probably not that much will settle, it might be a slight covering but certainly not expecting toneed warnings for that. In terms of impacts, it’s not expected to cause too many problems.

‘Into the early hours of Sunday, even places like the Chilterns and the high parts of the south east might get brief falls of wet snow.

‘We’re also likely to see snow on hills in the Yorkshire Dales and surrounding areas.’

The forecaster added: ‘Going to rush hour on Monday morning, we could see a couple of hours of snow in the higher grounds of Wales, northern England and Scotland as a band of snow from the West hits colder temperatures.’

Much of southern England is likely to see a mix of blustery showers and sunhine until Monday. Most lower areas in the North will escape the snow but will remain ‘cloudy and showery’ and face even colder temperatures.

A spokespseron for British Red Cross said Arwen has proven to be the ‘worst storm in 20 years’, adding: ‘Many families are still having to contend with freezing temperatures with no power.

‘Our staff and volunteers have been working tirelessly alongside local authorities, the emergency services and the voluntary sector to keep people safe, checking on vulnerable people and distributing water, hot water, food, torches and blankets.

‘If you’ve been affected by Storm Arwen you can contact the British Red Cross support line on 0808 196 3651. You can also find other useful information on our website redcross.org.uk.’

Kate: Thank you to those amazing people out there who have supported their communities

Queen and Meghan: The hilarious way Meghan and the Queen met – ‘literally bumped into her’