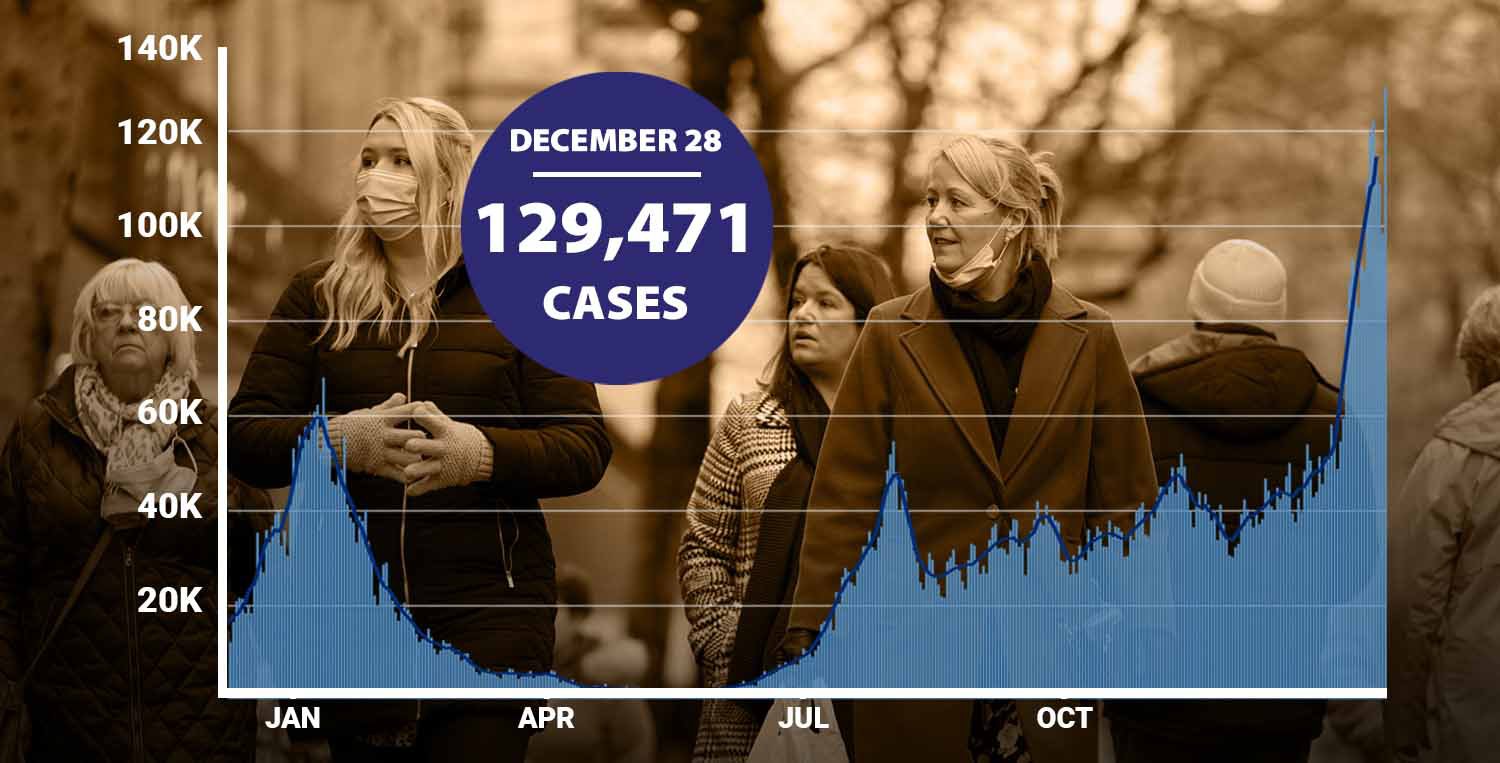 A further 129,471 Covid cases have been reported on the day after the Government decided against implementing any further restrictions.

There have also been 18 deaths among people who tested positive for Covid within the last 28 days.

The latest caseload is another record for a 24-hour period, surpassing the 122,186 reported on Christmas Eve.

It is also the sixth day in seven that cases have been higher than 100,000; a threshold which had never previously being surpassed during the whole pandemic.

Hospital admissions have increased by 48% week-on-week with 1,374 new Covid patients in England on December 26, according to the NHS.

This is the highest number since February 11 but still well below the second wave peak of 4,134 admissions on January 12.

There are also some signs that the situation is improving in London, the epicentre of the Omicron wave.

Reporting of cases has been disrupted over Christmas, with many NHS trusts not providing data until after the festive season so today’s figures may not represent the full picture.

Scotland and Northern Ireland have also not reported any new cases or deaths for several days.

Meanwhile, The UK Health Security Agency (UKHSA) said there had been 17,269 additional confirmed cases of the Omicron variant across the UK.

This brings the total confirmed cases of the variant to 177,201 although no case numbers have been reported in Scotland or Wales since December 23.

The number of deaths in England of people with Omicron has risen to 49 and hospital admissions due to the variant rose to 668.

Overall, a total of 9,546 people were in hospital in England with Covid as of 8am this morning.

This is up 38% from a week earlier and is the highest number since March 3.

In London, 3,024 people were in hospital with Covid on December 28, up 59% week-on-week and the highest number since February 19.

It comes as Brits were warned to celebrate New Year’s Eve ‘cautiously’ by taking tests and staying outside where possible.

‘Many people will know somebody who has caught this over the Christmas period.

‘So do be cautious. Take a lateral flow test before you go out. Go to well ventilated areas. I’ve been to a couple of outdoor parties actually.

‘People have moved things to outside so just be cautious. But you know, do try to enjoy yourself as well.’