London topped the list of UK cities with the most toxic drinking culture according to research by private rehab clinic Delamere, followed by Leeds and Bristol. The latest available health survey data show 27 percent of drinkers in Great Britain binge drink on their heaviest drinking days, with 19 percent of men and 12 percent of women reporting binge drinking in the last week. Alcoholism rates, after being stable for a decade, shot up in 2020 as a consequence of lockdowns. The UK nonetheless maintains a more responsible relationship to drinking than European counterparts Germany or France.

The UK has long had a reputation for enjoying alcoholic beverages, encapsulated in the image of the pint in the local pub.

According to the most recent Health Survey for England, published in 2019, 54 percent of adults reported drinking alcohol in the last week.

For the vast majority of Brits, casual drinking habits rarely exceed the advised weekly limit of 14 units, the proportion of people claiming to do so declining since 2011.

Nonetheless, alcohol misuse remains the biggest risk factor for death, ill-health and disability among 15-49 year olds in the UK, according to Local Alcohol Profiles for England.

There were 347,761 hospital admissions in the UK between 2019 and 2020 attributed to alcohol-specific causes, a rate of 644 per 100,000, yet some British cities contributed far more to the total than others. 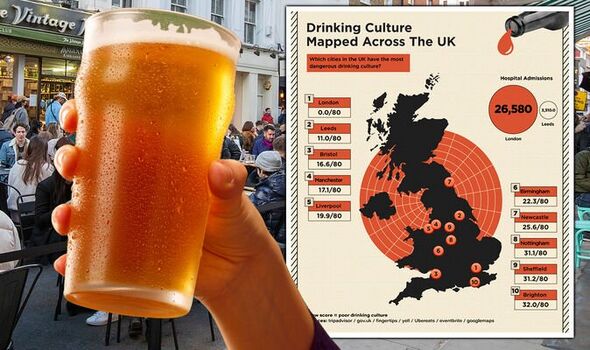 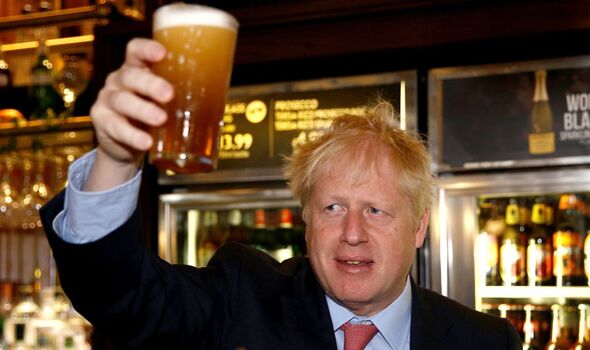 A recent study conducted by Delamere sought to find which city in the country had the most problematic drinking culture by looking at a combination of total number of bars and nightclubs, alcohol-related hospital admissions, number of off-licences and alcoholism rates per city and other related metrics.

London topped the chart due to the capital’s 1,068 bars and nightclubs, 26,580 alcohol-related hospital admissions between 2019 and 2020, 52 advertised alcohol tours and 92,615 residents diagnosed with alcoholism.

Leeds was second on the list, with 60 bottomless drinking locations, 3,310 hospital admissions and 9,954 recorded cases of alcohol dependency.

Bristol came in third place, notably because of its 37 alcohol delivery services, followed by Manchester and Liverpool. 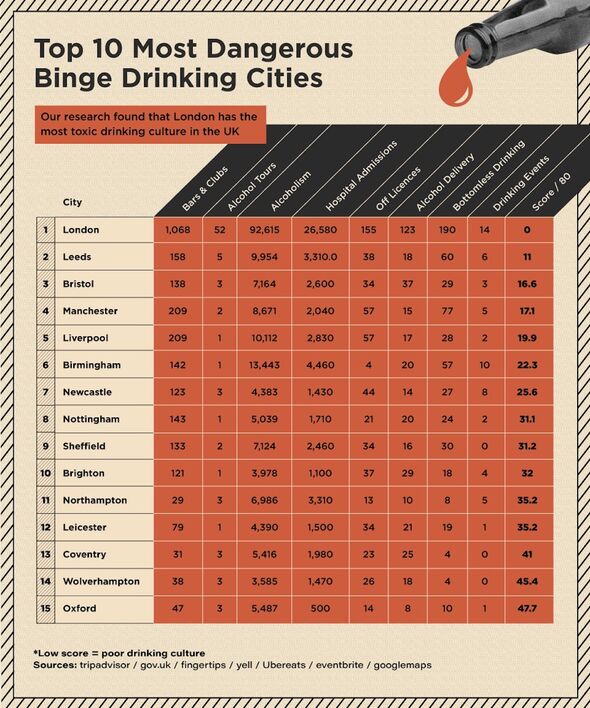 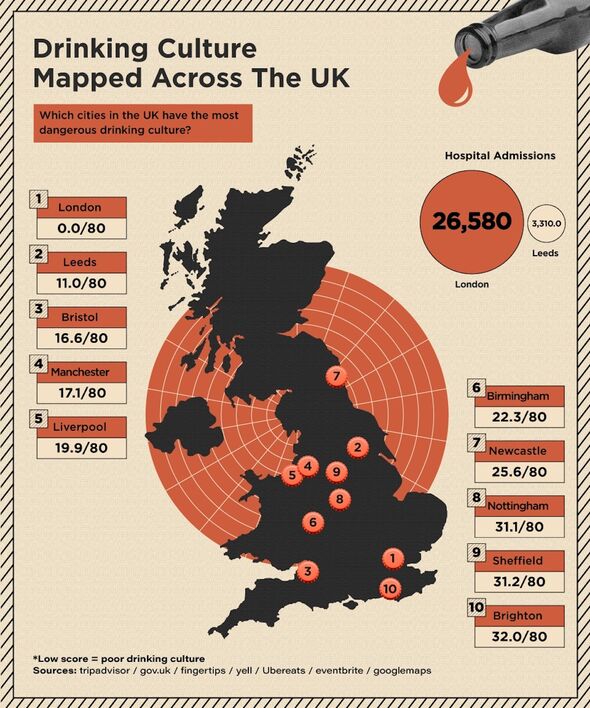 Despite falling outside of the top 15 in the study’s rankings, Southampton had the highest rate of alcohol-specific hospital admissions in the UK from 2019 to 2020, recording 2,590 cases.

In terms of the rate of alcohol-specific deaths, Blackpool’s rate of 27.3 per 100,000 was the worst in the country.

Rates of alcohol-specific deaths remained more or less stable in the UK over the past decade, totalling 7,544 in 2019, but increased significantly in 2020. 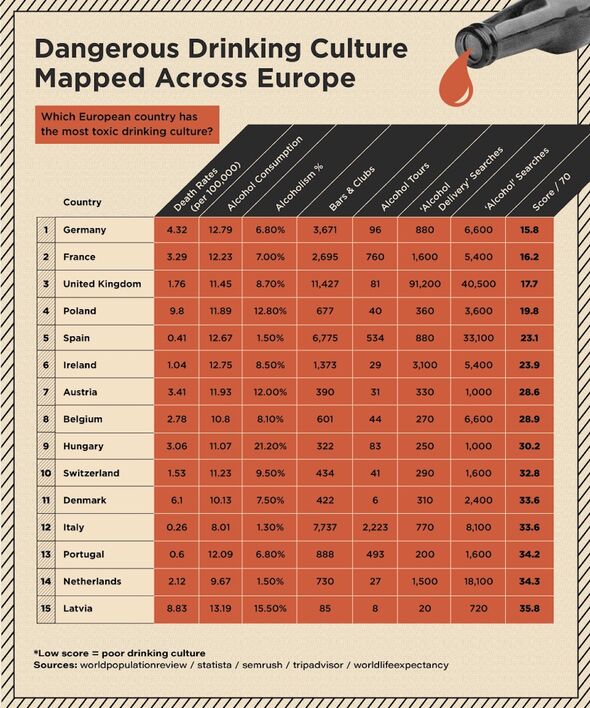 In the year when coronavirus lockdowns shuttered all the bars and pubs, excessive alcohol consumption caused 8,974 deaths, an 18.6 percent increase on 2019, the highest year-on-year hike on record.

The data show the top cities with the highest levels of binge drinking problems also have the most drinks delivery services in proportion to population, making alcohol easily accessible in spite of lockdowns.

Martin Preston, Founder and Chief Executive at Delamere, said: “The coronavirus pandemic caused an alarming spike in binge drinking levels across the UK, the isolation caused many people to turn to drinking high levels of alcohol at home.

“Drinking at home, rather than at a pub, removes the need to wait between drinks and also the worry around spending too much money.”

Using similar metrics, the countries with the most dangerous drinking cultures across Europe can be compared.

Top of the list was Germany, famous for its fondness for beer much celebrated during Oktoberfest, with an average weekly alcohol consumption of 12.79 units and an alarmingly high alcohol-related death rate of 4.32 per 100,000.

The UK was third on the list, topping the Continent in terms of bars, pubs and clubs with 11,427 locations, yet recording only 1.76 alcohol-related deaths per 100,000 people.

In terms of alcohol dependency rates alone, Eastern European countries tend to fare the worst in Europe, with 21.2 percent of Hungarians reportedly suffering from alcoholism, followed by Belarus with 18.8 percent and Latvia with 15.5 percent. 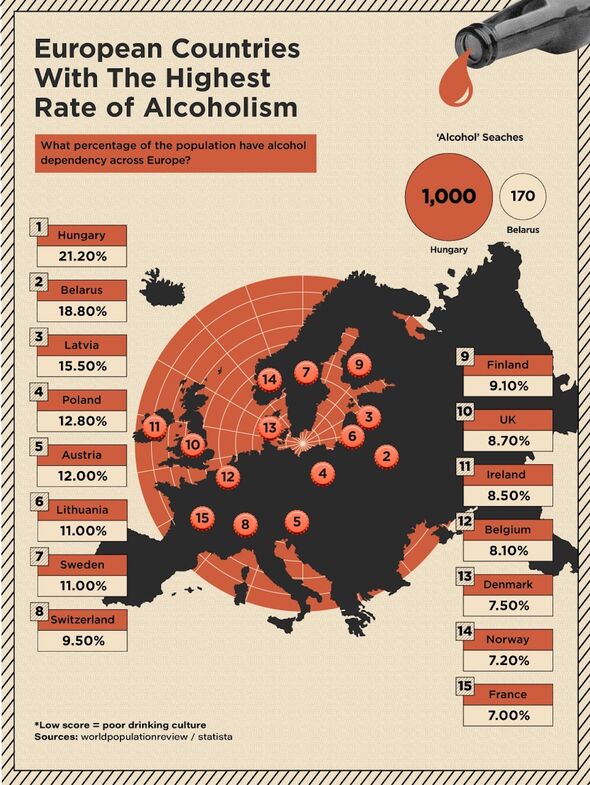 Aside from varying significantly from place to place, rates of alcohol consumption and all the associated health consequences are unevenly distributed demographically.

Of all the alcohol-specific hospital admissions in the UK between 2019 and 2020, 67.5 percent were male, according to the Health Survey for England.

The rate of alcohol-specific deaths is also consistently more than twice as high for males as it is for females.

Support for Scottish independence holds up as elections near