Home » Europe » UK migrant crossings reach RECORD high with ‘1,000 attempts’ to make it to Kent in one day 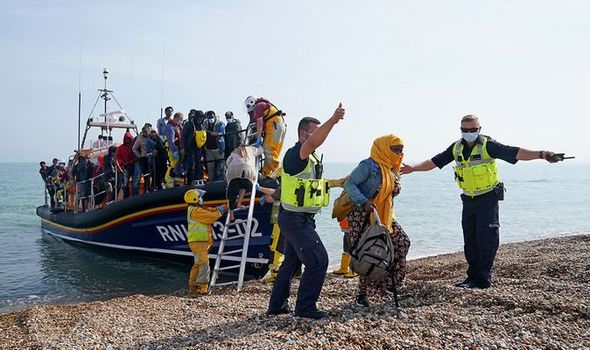 The figure – which is based on witness sightings by Sky News – is believed to be the highest figure and surpassed the previous record of 828 on August 21. A lifeboat full of migrants was pictured arriving in Kent this morning after picking them up from a dinghy out at sea.

Another dinghy was also shown pulled up on the shingle with discarded lifejackets.

Officials were seen leading passengers away and one woman was holding onto a small baby.

Three large coaches had parked up on a stretch of land and were apparently ready to drive the migrants away.

One onlooker said: “It looks like the authorities have been overwhelmed today.”

For the first time in two weeks, a small boat crossed the Channel on Sunday.

Some 158 people – including five children – made the perilous journey and arrived on Dover from four boats.

This brought the total number of people who have crossed the Channel this year to more than 12,500.

The Home Office have not yet revealed how many migrants have made the crossing.

In France it was reported that as many as 300 more people were seen in dunes near Dunkirk waiting for boats bound for the UK.

Despite surpassing last year’s annual total, it is believed the UK has seen far fewer boats making the crossing.

This came as Prime Minister Boris Johnson said Home Secretary Priti Patel is “working around the clock” to ensure France stops the passage of illegal migrants across the channel.

He told the Commons today: “My honourable friend is completely right and, of course, the issue is that very sadly I think our friends across the Channel in France are faced with a very difficult problem.

“A large number of people want to come to this country, and we are doing everything we can to encourage the French to do the necessary and impede their passage.

“But I know the Home Secretary is working right around the clock to ensure that we not only encourage the French to stiffen their sinuses and stop people making the journey, but we use every possible tactic available to us as well.”