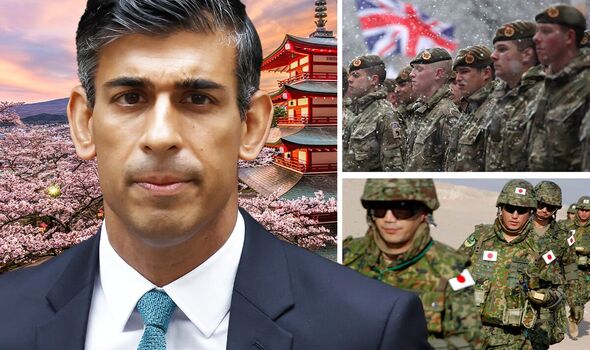 It will allow London and Tokyo to deploy troops in both countries. Officials said the defence agreement would allow both forces to plan and deliver larger and more complex military exercises and deployments. The Daily Express can confirm this agreement will cover the Army, Royal Navy and Royal Air Force.

It comes amid rising tensions between the West and China. Beijing has taken an increasingly belligerent stance towards Taiwan, threatening to invade the island.

Britain and Japan, as well as Italy, have also agreed to build the fighter jet of the future together.

The Tempest will take to the skies by 2035 and will succeed RAF Typhoon.

It will be armed with hypersonic weapons, radar-defying technology and even be able to fly unmanned.

Prime Minister Rishi Sunak said: “In the past 12 months, we have written the next chapter of the relationship between the UK and Japan – accelerating, building and deepening our ties.

“We have so much in common: a shared outlook on the world, a shared understanding of the threats and challenges we face, and a shared ambition to use our place in the world for global good, ensuring our countries prosper for generations to come.

“This Reciprocal Access Agreement is hugely significant for both our nations – it cements our commitment to the Indo-Pacific and underlines our joint efforts to bolster economic security, accelerate our defence cooperation and drive innovation that creates highly skilled jobs.

“In this increasingly competitive world, it is more important than ever that democratic societies continue to stand shoulder to shoulder as we navigate the unprecedented global challenges of our time.”

Mr Kishida’s visit to London is part of a whistle-stop tour to five G7 nations, marking Japan taking on the rotating presidency of the group for 2023.

His trip, which will see him visit France, Italy, the UK, Canada and finally the US in the space of five days, comes as Japan breaks from its post-war restraint to take on more offensive roles, with an eye toward China.

Japan announced last month it had adopted security and defence reforms, including a counter-strike capability that breaks from an exclusively self-defence-only principle that had been in place since its Second World War defeat.

While at the historic Tower of London, Mr Sunak and Mr Kishida will visit Japanese armour on display.

It was presented to King James VI in 1613 by the then-Shogun Tokugawa Hidetada of Japan.

The military gift was given to King James to mark the first trade agreement between England and Japan.