Ursula von der Leyen, who is in line to become the first female European Commission president in November, told MEPs it would be a “good development” if Britain decided to make a dramatic Brexit U-turn. During a meeting with liberal MEPs in Brussels, she signalled Theresa May’s Brexit deal will not be reopened by Britain’s next prime minister. Ms von der Leyen, a German defence minister who supports an EU army, also claimed Brexit should not be seen as the end of Britain’s relationship with Brussels.

Asked how she plans to handle Brexit, the German said: “We all know that we want you to remain, but I know how the facts are and I think it is very important that the way things go on, I hope for a good development, but in case we’re going to have a Brexit, I’m convinced it is crucial how the tone and attitude with which Brexit happens.

“Brexit is not the end of something, Brexit is the beginning of future relations, and it’s of absolute importance.”

In a warning to Boris Johnson and Jeremy Hunt, Ms von der Leyen said it was for British politicians to “sort out things out”.

Both Tory leadership contenders have suggested they would seek to scrap the controversial Northern Irish backstop, designed to avoid a hard border, as part of a renegotiation of their predecessors draft EU withdrawal agreement. 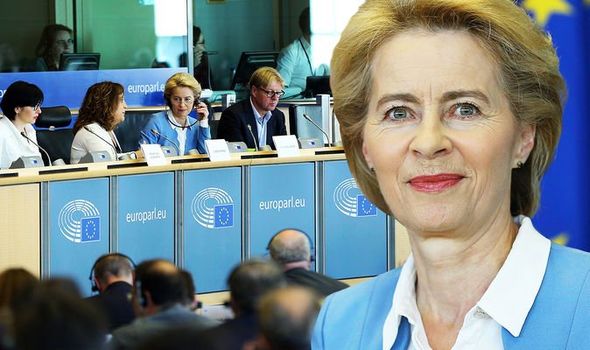 Ms von der Leyen hinted that she has little plans to reopen the backstop, insisting the current arrangements are a “good deal”.

She said: “Although I still hope you remain, it is in our interests to have you sort things out.

“We do have an agreement which hasn’t been signed on both sides, and we have the backstop and I think it’s a good deal but it’s your responsibility and noble task to sort things out.”

She added: “I think the backstop is of utmost importance and we absolutely know how crucial this non-existent border for you is, and therefore having the backstop in the Brexit deal is precious, important and has to be defended.”

The close ally to Angela Merkel has previously been steadfast in her support for the German Chancellor’s refusal to reopen the divorce deal and form a close future trading bond.

Ms von der Leyen also set out her chilling arch-federalist manifesto as she fights to secure support from MEPs for a vote on her presidency next week.

The German, who supports a united states of Europe, expressed her desire to push on with plans for an enlarged Schengen area, an EU army and for the bloc to be climate neutral by 2050.

She defined herself as the “incarnation of European spirit” because she was born in Brussels and educated at a European school.

After promising to listen to calls to enlarge Schengen and the Eurozone, Ms von der Leyen pledged to fast-track up her predecessor’s plans to introduce 10,000 more border guards to make her dream a reality.

“I’m a strong advocate of enlarging the Schengen area and Eurozone if countries want it and have reached the condition if required this goes to ruled-based order,” she said.

“It is necessary we have rules on both sides.”