The UK faces wet and windy weather before the freezing conditions of last week are replaced by unseasonably mild temperatures this weekend.

A yellow warning of gusts up to 75mph is in place for the far north west of Scotland on Wednesday, followed by ones for heavy rainfall in swathes of Scotland on Friday, and Devon and South Wales on Friday and Saturday.

But although large parts of the UK are braced for storms, well-above-average temperatures are predicted for the weekend – with possible highs of 15C (59F) in the South East. “In terms of the big temperature swings, you are probably looking at areas predominantly on the east coast where we saw lying snow last week and the temperatures were kept very low,” said Met Office spokesman Oli Claydon.

“It depends a little bit on what happens if that air does get drawn up from the south and also timings of the clouds, if they clear at the right time and you get a little bit of sunshine through to help those temperatures out a little bit.”

The average maximum temperature for the UK in February is 6.64C (43.9F), according to the Met Office.

But sudden rises are fairly common for this time of year, Mr Claydon adds. 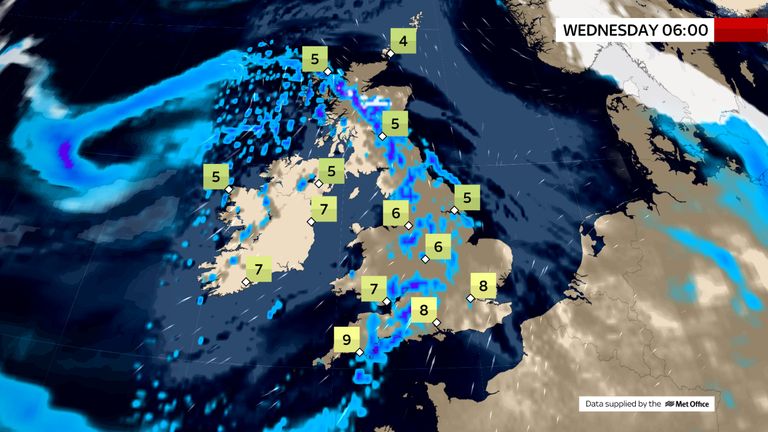 “Obviously, we are an island nation on the outskirts of the continent of Europe, so we are subject to very variable weather conditions and those changes can happen quite quickly.”

According to longer-range forecasts, a new mild air mass means fairer weather is set to remain for the rest of the month.

Areas that are subject to rain and wind warnings this week could see some areas flooded and transport services affected.

Any further snow will be confined to the Scottish mountains, the Met Office said.