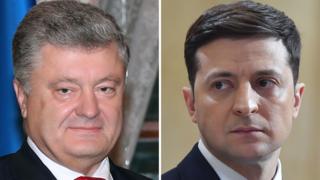 Comedian Volodymyr Zelensky is the clear favourite for Sunday’s second-round vote, according to opinion polls.

His rival, incumbent president Petro Poroshenko, argues that Mr Zelensky is a political novice unfit for such a demanding job.

But many Ukrainians are fed up with cronyism and corruption.

Mr Zelensky has relied on a slick social media campaign to tap into the frustration of many younger Ukrainians with establishment politicians.

Mr Zelensky’s links to billionaire oligarch Ihor Kolomoisky – a leading opponent of Mr Poroshenko – have led some to question the comedian’s credibility as a true “outsider” candidate.

The debate was agreed more than a week ago, but they disagreed over the date for it.

On 14 April Mr Poroshenko turned up at the stadium and used Mr Zelensky’s absence as an opportunity to answer journalists’ questions and attack the comedian.

Earlier, Mr Zelensky had set a surprise condition for holding such a debate: they must both undergo blood tests to detect any drugs or alcohol. Both were then photographed separately giving blood samples.

Mr Zelensky is a dollar millionaire, thanks to his popular comedy series and other acting roles, while Mr Poroshenko is a billionaire who got rich through confectionery and TV businesses.

How a Poisoning in Bulgaria Exposed Russian Assassins in Europe