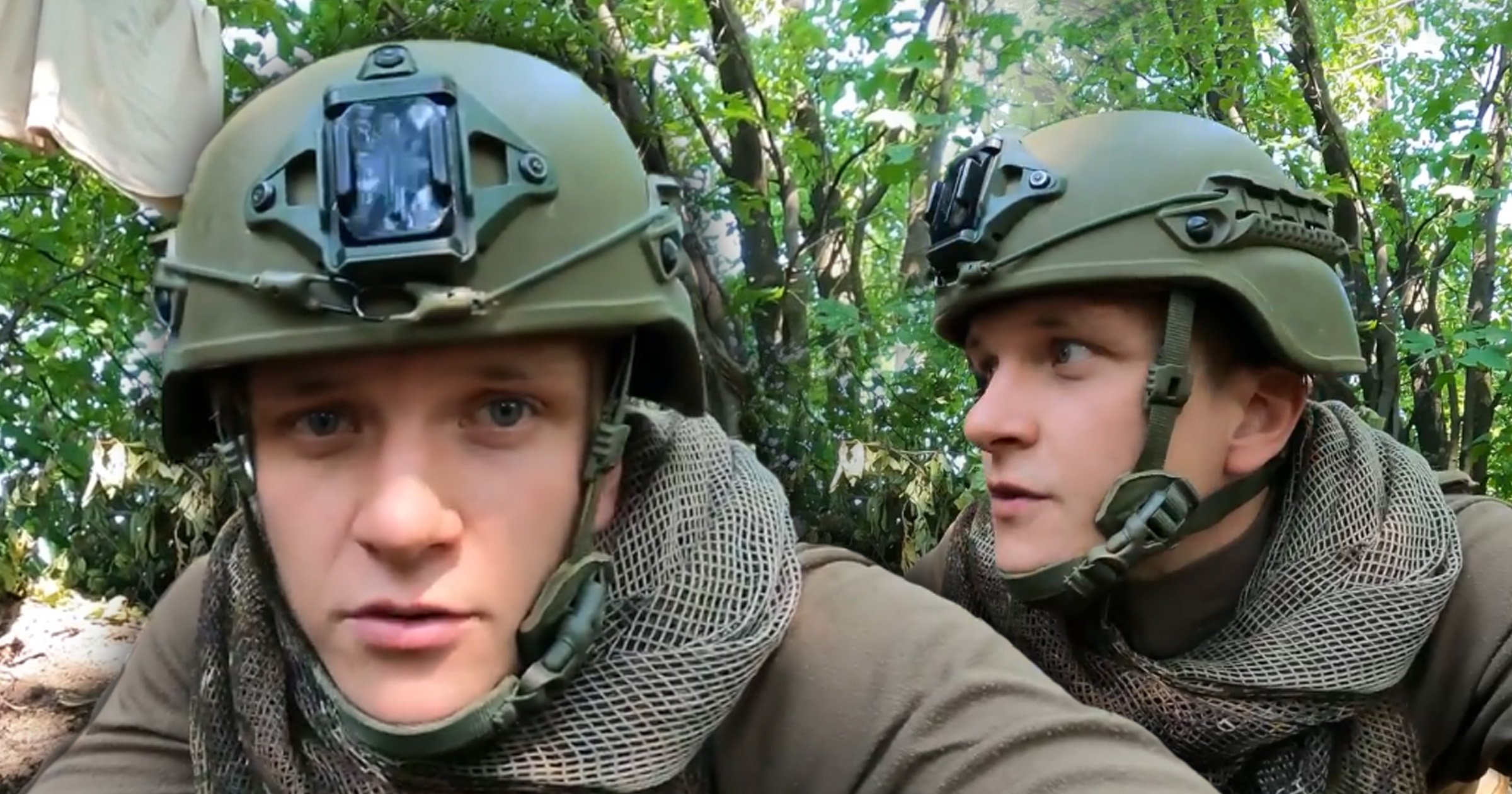 A Ukrainian soldier calmly pauses to admire nature while under intense fire from ‘angry’ Russian forces.

Roman Trokhymets shot what he thought might be his ‘last words’ for a viral TikTok clip while taking cover as explosions from shells rang out around him in the eastern Donbas region.

The 30-year-old’s service in Ukraine’s stoic resistance against the full-blown Russian invasion is a far cry from his civilian life as a real estate agent and acrobat in his home city of Kyiv.

In the video, entitled ‘thoughts and experiences under fire on the frontline’, he is shown in a tree line whispering and even flashing smiles as the rounds whistle in close by.

He looks around to remind himself of the land he is risking his life to protect and tells how the Russians are ‘angry’ and seeking revenge for a daring mission where he ‘destroyed many orcs and their vehicles’.

The anti-tank soldier and sniper, who was with only one comrade at the time, told Metro.co.uk that he wanted to record an important message in case one of the incoming rounds found its target.

‘There are not enough words to describe what it’s like on the frontline,’ he said. ‘It’s heroic, crazy and scary, it’s not somewhere normal people would want to be. I recorded the video to share my sincere thoughts with my sister and a few other people.

‘All I wanted at that moment was to survive and share that video, I didn’t realise it would get 1.2 million views from around the world.

‘I thought it might have been my last words.’

Roman previously served with the Azov Regiment after cutting short an architecture course a year after the Madian Revolution and Russia’s annexation of Crimea in 2014.

In the video, he says it is important to stay calm and not ‘go mad’ as he surveys the nature around him, including a bee, and closes his eyes and pretends to listen to a butterfly.

‘I’m reminding myself what I’m fighting for, why I’m here, to stop this evil,’ he says. ‘To keep it from going further, to protect our people and our land. That is when it is easy, when you know what you are fighting for, you can go through anything.’

Ending the video with a smile, he says: ‘We are here, fighting and winning.’

Before the full-scale attack was launched in February, Roman worked in real estate helping people from across the world to buy and rent in Kyiv and followed his passions for acrobatics and running.

Since rejoining the regiment, he has shared his frontline experiences on TikTok, where the video, which he recorded in May, has amassed 1.2million views to date. As well as boosting morale, he wants to counter pro-Moscow propaganda and conspiracy theorists claiming the war is fake.

One wellwisher wrote: ‘Thankyou so much for sharing your thoughts.

‘You are so brave God is watching over you. You are young and writing the history of beautiful Ukraine.’

Roman told Metro.co.uk: ‘I want to send my thanks to the UK, the US and Europe for the help it is giving us.

‘We are fighting not only for Ukraine but for the whole of Europe’s freedom.

‘We have a crazy neighbour who won’t stop with us and wants to conquer more countries. To have other people helping us is great motivation for me.

‘We want other countries to continue this support because the war is not finished and, in my opinion, interest from other countries is beginning to disappear. I want to remind the world that we are still fighting not just for our freedom but for that of the whole world.’

Roman’s father is safe from Russian fire, having relocated to London under the Homes for Ukraine scheme.

‘I’ve never visited the UK but I love Lord of the Rings, Shakespeare, Harry Potter and Sherlock Holmes, all this interesting stuff that was created in your country,’ Roman said

‘I hope one day I can visit and experience all this for myself.’

Ukrainian counter-offensives have pushed Russian forces back from the outskirts of Kyiv and occupied territory in the east and south.

The key strategic city of Kherson is expected to be the next major urban battleground in the pushback, which has involved the defenders making effective use of US-supplied long-range missiles.

According to the UK Ministry of Defence’s latest update, Russia has deployed several thousand newly-mobilised reservists to the frontline since mid-October. Many are said to be ‘poorly equipped’ and using AKM rifles, a weapon first introduced in 1959.

The Defence Intelligence update reads: ‘The integration of reservists with contract soldiers and combat veterans in Ukraine will mean Russian logisticians will have to push two types of small arms ammunition to frontline positions, rather than one.