Two vehicles were filmed driving close to families on Glencoyne Bay in the Lake District this Wednesday. One witness said the drivers were travelling at an “unreasonable speed” and putting “everyone else at risk”. The National Trust revealed that stone barriers stopping drivers has been moved.

The woman who filmed it told the BBC: “We were just completely shocked.

“There were still other families on the beach who all were grabbing their children and dogs as [the drivers] did this.

“The black car got over no problem but the blue car struggled and got stuck but still persisted in driving straight past us at an unreasonable speed to pack up and put their kids in the car, risking everyone else to do it.”

The National Trust added: “Moving stone barriers or driving over them poses an environmental risk to the protected Ullswater Lake through potential oil or fuel spills and puts other beach users in danger. 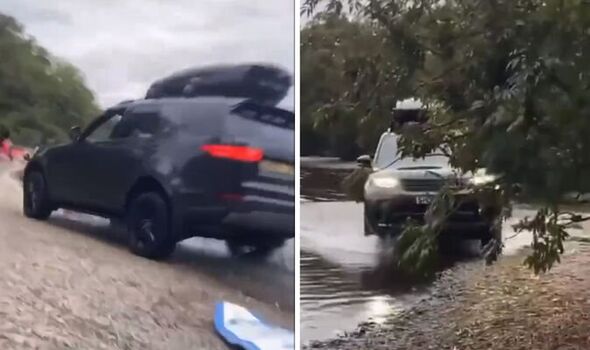 “Our ranger team have been on site today to ensure that the stone barriers are in place and there are no access points for cars.

“While we want people to enjoy the Lake District, we’d urge all visitors to make use of car parks and be aware of access needs of emergency services, farmers and local residents.”

It comes as pollution warnings were put in place at more than 40 beaches and swimming spots in England and Wales after heavy rain overwhelmed the sewage system following months of little or no rain.

The southwest and south coast of England were the worst affected, according to data gathered by environmental campaign group Surfers Against Sewage (SAS).

Swimmers are advised against bathing at seven beaches in Cornwall as a result of storm sewage overflows, with four in Devon and five in Dorset also polluted by the recent downpours.

Nine beaches in Sussex, three on the Isle of Wight, and three in Essex were also hit by storm sewage.

Elsewhere, there were warnings in place at spots in Lincolnshire, Cumbria, Lancashire, and South Wales, as well as two inland wild swimming spots near Bristol and near Minehead in Somerset.

On Tuesday, there was an alert at Spittal near Berwick in Northumberland, although this has since cleared. 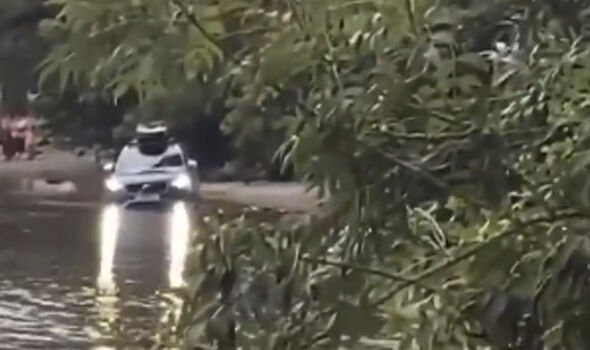 There has been growing public outrage in recent years at the volume of raw or partially-treated sewage pumped into the UK’s rivers and coastal waters.

Hugo Tagholm, the chief executive of SAS, tweeted on Tuesday: “The shitstorm after the calm. Many south coast beaches off limits due to SouthernWater sewage discharges.”

A spokeswoman for SAS said there were a further nine pollution warnings in place not linked to heavy rain, and those visiting the coast are advised to always check its interactive map on its website before they swim.

In a report published in July, the Environment Agency said water company bosses should face jail for the worst pollution incidents, describing the sector’s performance in 2021 as the “worst we have seen for years”.