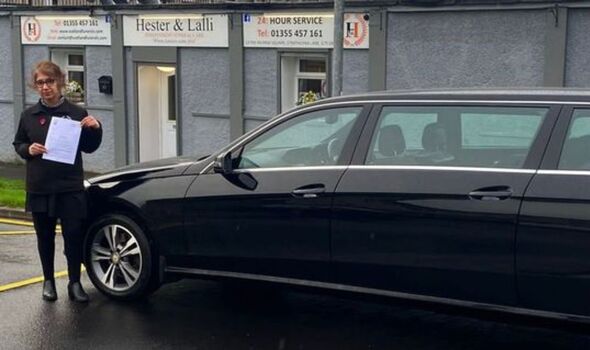 An undertaker who was fined for dropping off a heartbroken family at a wake in the pouring rain has won her case against the council.

Dee Lalli was given a fixed penalty notice after crossing a bus lane to reach a pub after a funeral service on October 11.

However, the vehicle ended up driving through the bus lane in order to drop the family off in front of the venue as it was “lashing” down with rain.

The appeal process took two months of going back and forth, but Dee has won and will not have to pay the £60 fine.

Describing her “relief,” she said: “I was jumping up and down in my seat; I was like, I can’t believe this.

“I never thought this was going to happen. Nobody wins against Glasgow City Council.

“It’s a relief, and more than anything else, the fact that we won it we know we have done a good job by looking out for our families.”

Dee admits she felt “saddened” after receiving the fine but says she would do it again for her grief-stricken families.

She added: “You are trying to look after a family and for us we will look after our families as best we can and go the extra mile for them. I was saddened that they did not see that.

“The family were dropped off and the driver drove off. If we had to do it again, I would still do it just to look after my families.

“I wasn’t going to let it go because it was hurting me inside. There’s hundreds of families out there who will be in the same position.

“I would do it again if I had to. My families come first and I will go to lengths for them.”

A spokesman for Glasgow City Council said: “We have been notified of the tribunal’s decision and the fine in this case no longer requires to be paid.”