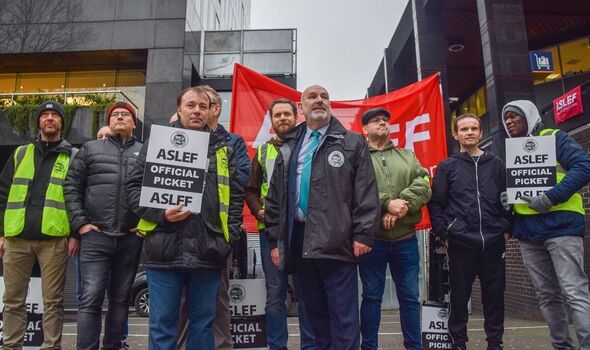 Employers could even sue unions which do not comply with the minimum service standards.

Unions are furious, calling it an attack on the right to strike. But ministers have invited unions for “honest, constructive conversations” about pay and will consult on the “adequate level of coverage”.

Mr Shapps’ announcement came as a wave of strikes, including a walkout by train drivers, crippled rail services on Thursday.

It was estimated just 20 per cent of normal routes ran, as passengers faced a third consecutive day of disruption in the first working week of 2023.

Meanwhile, the RMT union is set to stage another 48-hour strike on Friday and Saturday.

Angry unions said the new service standards would do nothing to resolve the disputes breaking out across the country every week.

Mr Shapps said on Thursday he would “rather we never have to go down this route”. He hoped unions and employers could “get together and do sensible things in order to guarantee a minimum safety or service level in each different area”.

But he said recent ambulance strikes had left Britain with a “postcode lottery” of services.

He added: “There has to be a minimum safety level that people can expect, even on strike days, particularly in areas like health care, making sure that an ambulance can turn up.”

In what it calls a “reasonable approach” to avoiding prolonged industrial action, the Government will invite unions for talks on fair and affordable public sector pay settlements for 2023/24.

A spokesman said: “We will always protect the ability to strike, but it must be balanced with the public’s right to life and livelihoods. That’s why the Government will introduce new laws to ensure a basic level of service in some of our most crucial sectors when industrial action takes place.”

He said: “We’re currently, with 11 other trade unions, taking legal action against the last set of laws they put in place and we would look at doing that in future as well. I think that if the Government gets away with what it’s doing, we’ll be left with an inherently unsafe railway system.” TUC general secretary Paul Nowak said: “This is an attack on the right to strike. It’s an attack on working people and it’s an attack on one of our longstanding British liberties.”

He added: “The announcement offers nothing more to help with this year’s pay and the cost-of-living crisis.”