Hundreds of thousands of men were killed during World War I, and many of the soldiers were buried in cemeteries near the battlefields. After the war, it was a source of great sadness that many of the soldiers who died were not identified, and that families could not visit the graves of their loved ones. The Tomb of the Unknown Warrior was intended to honour those who died during the war and provide a place where grieving families could pay their respect to those who would be forever missing.

What is the story of the Unknown Warrior?

One hundred years ago, the body of an unknown soldier was carried from France to London.

Reverend David Railton, a chaplain serving at the Western Front during the war, seems to have been the first to come up with the idea of creating a Tomb of the Unknown Warrior.

Reverend Railton noticed that in a back garden in Armentières, a grave was marked with a cross with the inscription “An Unknown British Soldier”. 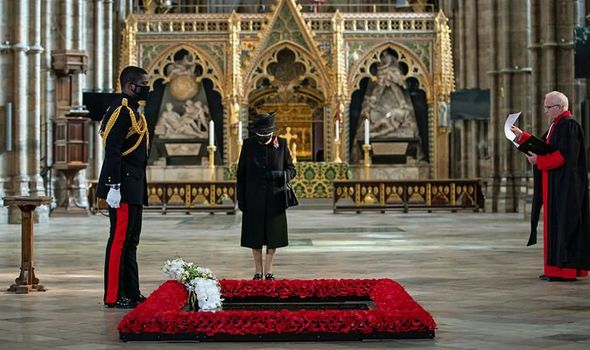 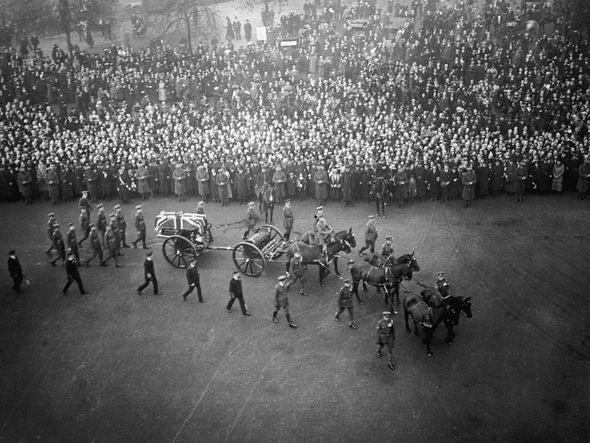 In August 1920, Reverend Railton wrote to Herbert Ryle, the Dean of Westminster, and plans for a memorial began.

Four British servicemen were exhumed from battle areas: the Aisne, the Somme, Arras and Ypres.

The bodies were taken to a chapel at St Pol and were covered in Union Flags, and on the night of November 7, 1920, Brigadier General L J Wyatt, an officer in charge of the troops in France and Flanders, selected one body.

Brigadier Wyatt wrote to the Telegraph in 1939: “The four bodies lay on stretchers, each covered by a union jack, in front of the altar was the shell of the coffin which had been sent from England to receive the remains. 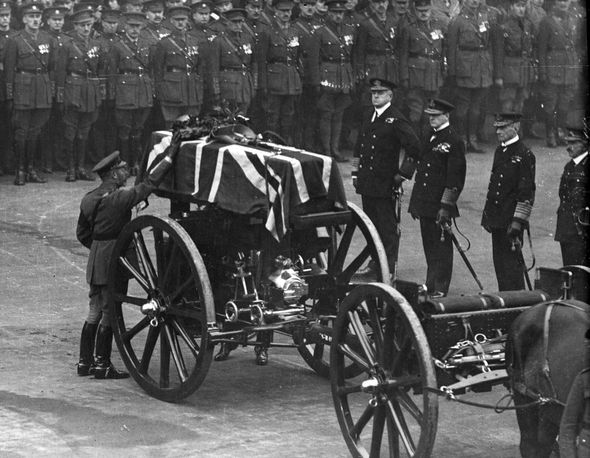 “I selected one, and with the assistance of Colonel Gell, placed it in the shell; we screwed down the lid.

“The other bodies were removed and reburied in the military cemetery outside my headquarters at St Pol.

“I had no idea even of the area from which the body I selected had come; no one else can know it.”

The soldier’s body was transported from the chapel at St Pol to Boulogne, where the coffin was placed inside another coffin which bore a 16th Century sword from the private collection of King George V.

DON’T MISS:
Why does the Queen wear five poppies for Remembrance Day? [PICTURES]
Why was Princess Anne the only female royal not on the balconies? [ANALYSIS]
A sneak peak at military veteran’s exquisite remembrance day displays [INSIGHT] 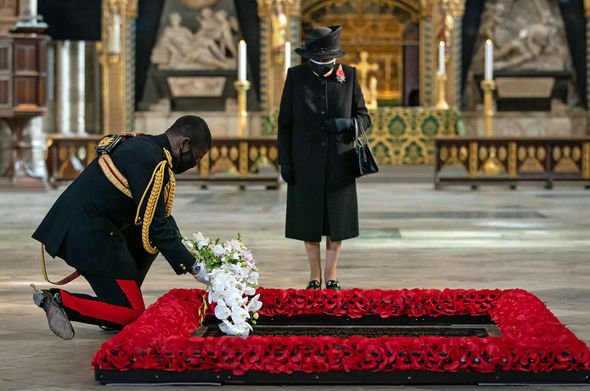 The coffin was made of two-inch-thick oak from a tree which had grown in the gardens of Hampton Court Palace.

The coffin was then taken to Dover by HMS Verdun, before making the final journey to London by train.

On November 11, 1920, the coffin was taken from Victoria Station and placed on a gun carriage drawn by six black horses.

The coffin made its way through the streets of London, where crowds had gathered, to the Cenotaph in Whitehall. 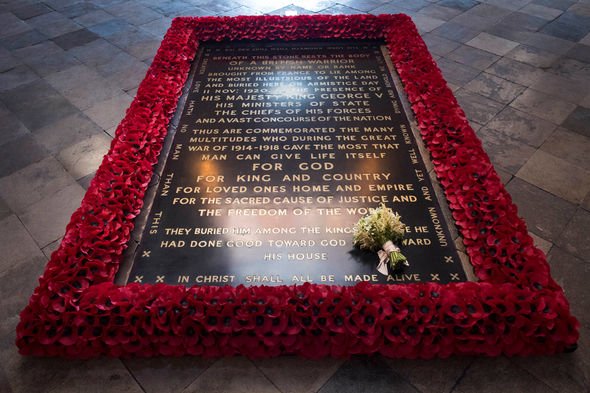 King George V laid a wreath of red roses and bay leaves on the coffin, along with a card which read: “In proud memory of those Warriors who died unknown in the Great War.

The coffin was then followed by escorting pallbearers, the King and other members of the Royal Family and ministers, to Westminster Abbey.

The soldier’s burial was witnessed by around 1,000 mourners, including the King, and the grave was filled with earth from the battlefields.

Where is the Tomb of the Unknown Warrior?

The Tomb of the Unknown Warrior is located at the west of the Nave of Westminster Abbey in London, and is covered by a slab of black Belgian marble.

To this day, 100 years later, many still visit the soldier’s grave to pay their respect to those who lost their lives in the war.

On the day of her wedding, she laid her bouquet at the Tomb on her way into the Abbey, out of respect to her late brother Fergus who died at the Battle of Loos in 1915.

In the decades since, royal brides have carried on the tradition and their bouquets have been laid at the Tomb on their wedding days.

House worth £1,300,000 has enough plug sockets for everyone in the street