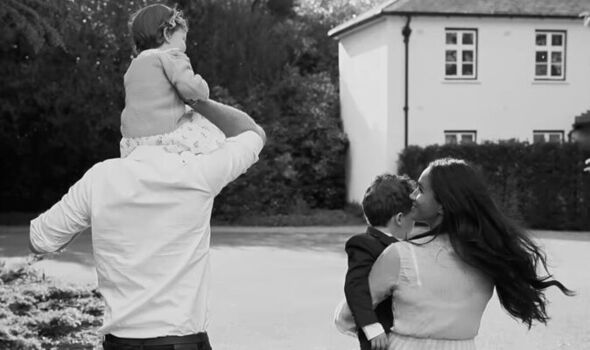 Meghan Markle and Prince Harry have shared pictures of their children Archie and Lilibet taken during Elizabeth II’s Platinum Jubilee. Harry carries Lilibet on his shoulders while Archie is in his mother’s arms in the previously unseen black and white image.

The photograph shows the Sussexes walking in the garden of their UK home, Frogmore Cottage, with Archie appearing to be dressed in a shirt and suit while Lilibet wears a skirt with a floral pattern.

Meghan and Harry brought Archie and Lilibet to Britain for the first time since they quit their royal duties and moved to North America.

The image forms part of a wide selection of intimate, family snaps which feature in a trailer for the next instalment of the Sussexes’ new Netflix documentary.

Three episodes were released last week, with the next three expected to air this Thursday morning.

The next episodes of the duke and duchess’s series are set to explore their decision to step away from royal duties and make a life in America.

In the 90-second clip, Harry is heard saying: “I wonder what would’ve happened to us had we not got out when we did.”

Meghan adds: “Our security was being pulled. Everyone in the world knew where we were.”

The Duke also can be heard saying: “I said, ‘We need to get out of here’.”

My only crime was having affair with Mary – accused