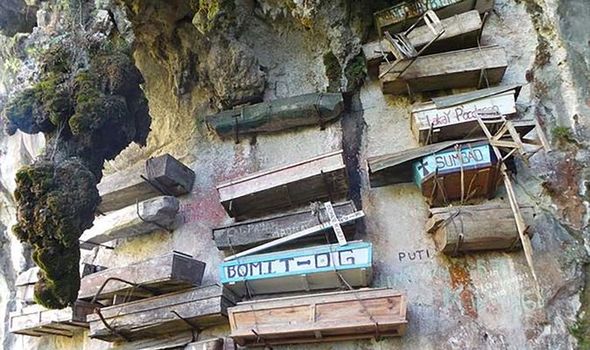 This allows friends and family to remember the individual who died and helps to grieve a loss. However, some other cultures ‘celebrate’ death with more bizarre rituals. These may seem odd to us Britons but such traditions carry great significance.

The Igorot tribe of the Mountain Province in Northern Philippines practice the tradition of burying their dead in hanging coffins.

Although it now only takes place every few years or so, the coffins are either tied or nailed to the sides of cliffs. They only measure about one metre in length, as the corpse is buried in the foetal position.

Before being taken for burial, it is wrapped again in a blanket and tied with rattan leaves while a small group of men chip holes into the side of the cliff to hammer in the support for the coffin.

The group then climb up the side of the cliff and place the corpse inside a hollowed-out lumber coffin.

This Tibetan funeral practise involves placing the deceased’s body on a mountaintop to decompose and leaving it exposed “to the elements” and to be eaten by scavenging animals.

This excarnation practice is common in the Chinese provinces and autonomous regions of Tibet, Qinghai, Sichuan and Inner Mongolia and Mongolia.

The body is taken to the sky burial site by villagers by horse or car, and the master of the sky burial ceremony will then perform rituals over the body.

Once birds have circled over the site, the burial master will chop the body into small pieces for the birds to feast upon. It is a good sign if the entire body is consumed.

A cigarette in the lips ‑ Philippines

In the Philippines, the Tinguians dress up their deceased in their best outfit and sit the body in a chair.

The body will remain there for several weeks, often with a lit cigarette placed between the lips.

Corpses are buried sitting up and to prevent “ghosts from roaming” women have their hands tied to their feet.

In South Korea, “death beads” aren’t a fashion trend but a way of honouring the dead.

The death bead idea gained popularity since a 2,000 law that required anyone burying the dead after the year 2,000 to remove the grave 60 years after burial.

This is due to a lack of burial space in South Korea. Thus, cultural changes have increased the cremation rate, and the beads are seen as more wholesome than creepy.

Originating from Norse poetry and Icelandic sagas, a ship burial involves the deceased being laid in a boat and given grave offerings.

Following this, piles of stone and soil are laid on top of the remains to create a tumulis ‑ a burial ground.

The concept of a “Viking funeral” is popular today, but as seen in a Q&A from Scattering Ashes, it definitely won’t be done the traditional Nordic way.

At Sutton Hoo in Suffolk, you can see an undisturbed ship burial alongside a range of Anglo-Saxon artefacts.

Funeral strippers are actually a thing in China. As reported by The BBC, strippers are used to boost funeral attendance with large crowds seen as a mark of honour for the deceased.

Understandably it is not all to everyone’s taste, as seen in a report by The Global Times vowing to crack down on funeral strippers.

Catch up with the dead ‑ Madagascar

Held every five to seven years, Famadihana is the ‘day of the dead’ for Madagascar. It is where families will dig up their ancestors by exhuming them and wrapping them in fresh shrouds.

They also perfume the bodies, dance with them, and even share stories with the corpses for a general catch up.

John Major on ‘inappropriate’ offers after leaving Downing Street: ‘I would never lobby!’