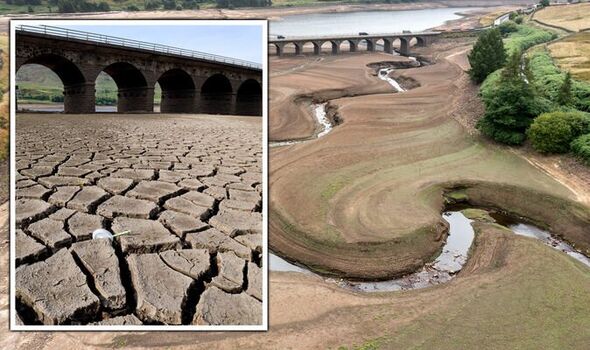 John Curtin, the executive director for local operations at the Environment Agency (EA), said it will take “weeks of rain” to stop the drought. Forecasters at the Met Office issued a warning for thunderstorms on Monday which covers most of England, Wales and Scotland.

Although some places could see around 2in of rain falling within a three-hour period, the scorched nation needs significantly more to top up depleted reservoirs and rivers.

Mr Curtin said “Mainly [the drought] is a signal that this is not a normal summer now, so that water will be an issue and probably will be an issue for months ahead depending how the winter goes.

“It all depends on the weather I’m afraid. There will be heavy showers probably Monday, Tuesday next week.

“But please, don’t think that will stop the drought because we’re talking about… we’ve lost a week’s worth of rain and it’ll take weeks of rain, we’ll need probably average or slightly above average rainfall this autumn into this winter for us to not be in a drought next year.”

The amount of water held in England’s reservoirs stood at just 65 percent of total capacity at the end of last month – the lowest level for that point in the calendar year since 1995.

The UK has had five consecutive months of below-average rainfall and back-to-back heat waves, with temperatures expected to peak tomorrow at 99F (37C).

The EA has moved eight of its 14 areas into a drought, impacting up to 30 million people.

Millions of people face hosepipe bans because of low-water levels and tinder-dry conditions gripping the UK.

Environment Secretary George Eustice said the country is in a “stronger position than ever” to withstand drought situations.

He insisted temporary use bans introduced across multiple regions were “no reason” to be “alarmed”.

But when asked whether taps could run dry next year, he said: “Well, if we have another dry winter on top of a very dry summer, the risk for 2023 does become greater.

“And that’s why it’s important that in the latter part of this summer we show some restraint because while we are likely to get those usual winter rains that will replenish stocks in our reservoirs, there is a risk that we’ll have a dry winter following a dry summer.”

The UK Health Security Agency extended its heat-health alert until Tuesday morning when temperatures are expected to be around 77F (25C).

Most reservoirs are now classed as being “exceptionally low” because of the lack of winter and autumn rainfall, figures from the EA showed.

Yorkshire Water said that a ban would start on August 26 after parts of the region experienced the lowest rainfall since records began more than 130 years ago.

Thames Water said it is “ready to go” with a hosepipe ban but failed to confirm a date for when restrictions would be imposed.

The National Farmers Union (NFU) said crops such as sugar beet and maize are showing signs of stress from a lack of rain.

Crops relying on irrigation, such as field vegetables and potatoes, are also facing problems.

Tom Bradshaw, NFU deputy president, said the situation was “hugely challenging” for farmers who were facing running out of irrigation water and having to use winter feed for animals because of a lack of grass.

This week Morrisons joined other major supermarkets in halting the sale of disposable barbecues while fires broke out across the nation.

Retailers have been under pressure to suspend sales of disposable barbecues after fire brigades warned that dry conditions mean grassy areas are “like tinderboxes”.

Warnings are in place over the risk of wildfires because of rising temperatures made worse by climate change.

Philip Dunne MP, the chairman of the Environmental Audit Committee, said: “It is deeply concerning that a drought has been declared in parts of England.

“Manmade climate change is speeding up the frequency and severity of heatwaves. As a result, we are witnessing rivers running dry and shrinking reservoir levels placing unprecedented pressure on our water supply.

“We must not rest on our laurels that ‘enough’ is being done to tackle climate change: the severity and frequency of heatwaves must concentrate minds and lead to efforts being ramped up to adapt the way we use and appreciate water.”

A Water UK spokeswoman said: “Water companies have comprehensive plans in place to deal with long periods of dry weather which have already been deployed and are not dependent on a drought being called.

“Companies continue to take appropriate measures in line with their prepared plans to protect public supplies of water and the environment.”

Childcare: Can your children go to school if you work in manufacturing or construction?