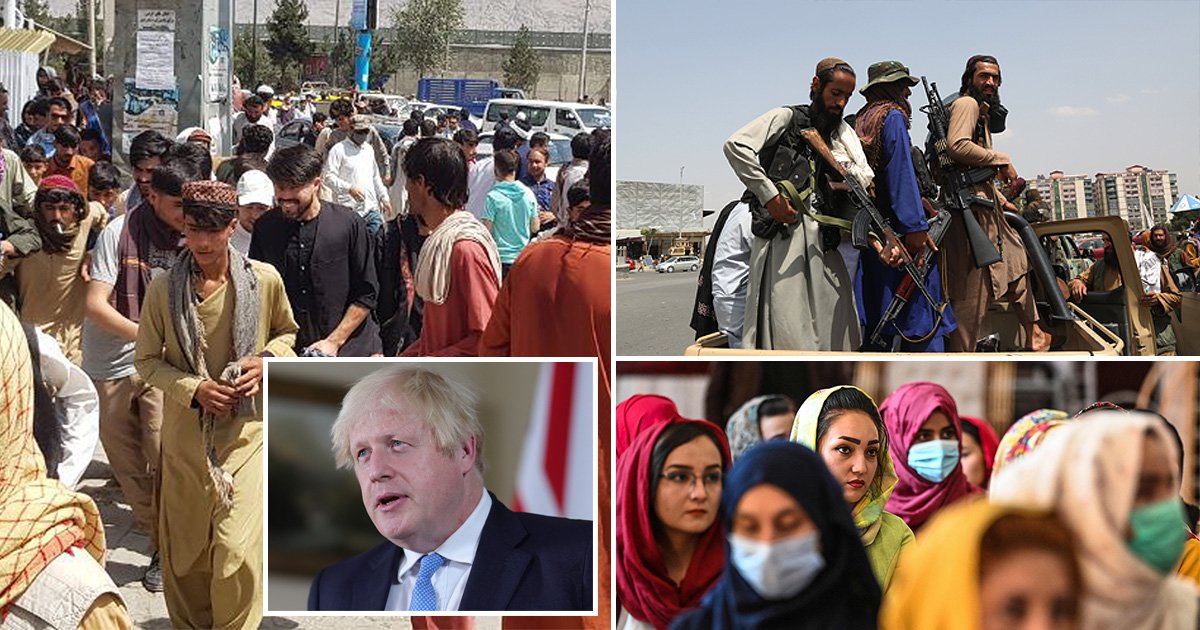 Thousands of Afghans will be granted asylum in the UK under a new scheme announced by the Government today – but critics claim Boris Johnson has not gone far enough to protect the vulnerable after the Taliban seized power.

Women, children and others who face the threat of persecution will be prioritised, as harrowing reports claim the Taliban has been targeting girls young as 12 to become sex slaves.

The prime minister said tonight the country ‘owes a debt of gratitude to all those who have worked with us to make Afghanistan a better place over the last 20 years’.

He added: ‘Many of them, particularly women, are now in urgent need of our help. I am proud that the UK has been able to put in place this route to help them and their families live safely in the UK.’

But opposition parties said the Afghan Citizens’ Resettlement Scheme did ‘not meet the scale of the challenge’ and there must be a ‘more urgent plan of action’.

Shadow home secretary Nick Thomas-Symonds said: ‘Not only does that risk leaving people in Afghanistan in deadly danger, it will also undermine the leadership role Britain must play in persuading international partners to live up to their responsibilities.’

Ian Blackford, the SNP’s leader in Westminster, said the target should be to welcome at least 35,000 to 40,000 Afghan refugees amid fears Afghanistan will soon become a hotbed for terrorism.

Meanwhile, Layla Moran, Liberal Democrat spokesperson for foreign affairs, said: ‘We need these vulnerable people out of the country as soon as possible, instead of the Government’s vague promise of the “long-term”.

‘The Government have kicked this into the long grass when Afghans need help now, today. 20,000 should be the starting point of this scheme, not the target.’

The new scheme is modelled on the Syrian Vulnerable Persons Resettlement Scheme, which resettled 20,000 Syrian refugees over a seven-year period from 2014 to 2021.

It is on top of the Afghan Relocations and Assistance Policy (ARAP) which is set to welcome 5,000 Afghans to the UK.

Two thousand people have already arrived under the ARAP, which is designed to offer local allies such as interpreters priority relocation.

Home Secretary Priti Patel said on Tuesday evening: ‘I want to ensure that as a nation we do everything possible to provide support to the most vulnerable fleeing Afghanistan so they can start a new life in safety in the UK, away from the tyranny and oppression they now face.’

Her remarks came after she chaired a meeting of the Five Eyes intelligence alliance – made up of Australia, Canada, New Zealand, the United Kingdom and the United States – to identify safe and legal routes for those who need to flee Afghanistan.

Mr Johnson is expected to address Parliament on the Afghanistan crisis tomorrow as MPs are summoned from their summer break early.

Child, 5, rushed to hospital after falling from window at home