ROME — The Vatican said on Thursday that it had extended an agreement with Beijing over the appointment of bishops in China, weeks after Secretary of State Mike Pompeo traveled to the Vatican on an unsuccessful mission to kill it.

The announcement renewed for another two years a historic agreement struck in 2018 that ended a decades-old power struggle over the right to appoint bishops in China, despite concerns over religious liberty and human rights in the country.

The deal calls for China to formally recognize the pope’s authority within the Roman Catholic Church and his final say over the country’s bishops. The Vatican in turn recognized the legitimacy of bishops previously appointed by the Chinese government and excommunicated by the church.

Beyond that, the details of the agreement have been kept largely confidential, to the dismay of some critics of Pope Francis.

“The Holy See considers the initial application of the Agreement — which is of great ecclesial and pastoral value — to have been positive, thanks to good communication and cooperation between the parties on the matters agreed upon,” the Vatican said in a statement, adding that the Holy See “intends to pursue an open and constructive dialogue for the benefit of the life of the Catholic Church and the good of Chinese people.”

The continuation of the agreement and cooperation between the two states has led some Vatican experts to consider it a critical step on the road to diplomatic relations with Beijing, which could mean the Vatican cutting ties with Taiwan.

On Thursday, the Foreign Ministry in Taiwan said that the Holy See had often made it clear the deal was pastoral, and not political, in nature, while noting that it had expressed its “concern and position” while maintaining close contacts.

Previewing the deal’s announcement on Wednesday, Pietro Parolin, the Vatican’s secretary of state and its second-ranking official after the pope, said talk of diplomatic relations was premature.

Zhao Lijian, a spokesman for the Chinese Foreign Ministry, said, “After friendly negotiations, China and the Vatican decided to extend the temporary agreement on the appointment of bishops for two years.”

“The two sides will continue to maintain close communication and consultations, and continue to promote the process of improving relations,” he added.

The pope and the Vatican have portrayed the deal as a step in a long journey to better provide for the pastoral needs of Catholics in China, the world’s most populous nation, where the growth of Protestantism is far outpacing Catholicism.

“Today already, for the first time in many decades, all the bishops in China are in communion with the Bishop of Rome and, thanks to the implementation of the Agreement, there won’t be any more illegitimate ordinations,” read a supplemental note on the deal released in the Vatican’s official newspaper, L’Osservatore Romano.

The note said that two bishops, Msgr. Antonio Yao Shun of Jining, an autonomous region of Inner Mongolia, and Msgr. Stefano Xu Hongwei of Hanzhong, in the central province of Shaanxi, had been appointed in accordance with the agreement. Other ordinations were in progress, the note said, though the pandemic has slowed things down.

“Statistically, this may not look like a great result,” the note said. “It represents, however, a good start.”

The agreement has engendered opposition from conservatives in the church who argue that it sells out those who have suffered for decades in China’s underground Catholic Church, because those faithful had refused to recognize bishops appointed by the Communist government and not by Rome. The agreement, they argue, effectively condones China’s religious liberty and human rights violations. 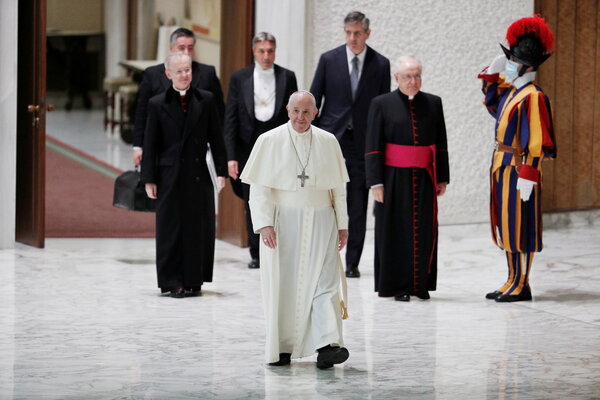 The Vatican newspaper pointed out that popes before Francis had sought deeper relations with China and that the work on the current agreement began under his predecessor, Benedict XVI.

The agreement, it argued, was “exclusively the matter of bishops’ appointments” and did not broach other issues “that still cause worry for the Church.”

Archbishop Paul Gallagher, the Vatican foreign minister, had stressed “human rights” in his conversations with the Chinese foreign secretary, the paper said. “The Holy See is deeply aware of them, takes them into much account,” it added, “and doesn’t fail to draw the Chinese government’s attention to favor a more fruitful exercise of religious freedom.”

In the prelude to negotiations over the agreement, hackers presumed by cybersecurity experts to be working for the Chinese state appeared to have infiltrated the Vatican’s computer networks. The Vatican moved ahead with talks regardless and, in its statement, preferred to emphasize the meetings between top Vatican diplomats and their Chinese counterparts.

The Vatican said that the actual substance and details of the deal would remain secret and “given its experimental nature, was kept confidential by mutual consent.”

That bothered some critics.

“My main objection to the agreement is we don’t know what it is,” the American cardinal Raymond Burke, the de facto leader of critics of Pope Francis inside the church, said in a brief interview before greeting Mr. Pompeo at an event organized by the U.S. Embassy to the Vatican last month.

In September, Mr. Pompeo angered some of the Vatican’s top officials, including those negotiating with the Chinese, by publicly calling on the church to break off talks with China to preserve its moral standing. The fact that he chose a conservative Christian magazine critical of the pope to air his grievances did not engender much sympathy among the church’s leaders.

The Vatican brushed off Mr. Pompeo, who was denied a meeting with the pope. Mr. Pompeo’s appeals for Francis to follow the model of John Paul II, who famously stood up to Communism but also practiced realpolitik, were considered inside the Vatican as electioneering.

“Some sectors of international politics have tried to analyze the work of the Holy See mainly according to a geopolitical” consideration, a note in the Vatican newspaper read, insisting that the deal was purely a church matter that could, in creating a spirit of communication, be “to the advantage of the entire international community.”