BBC documentary Brexit: Behind Closed Doors features the EU’s Brexit Steering Group toasting to a lengthy Brexit process in never-before-seen video footage from 2017, before Brexit talks kicked off between the UK and EU. One member of the group can be heard saying they work better with wine, to which Belgian MEP Guy Verhofstadt, who is considered the front-runner for European Commission president, nodded and said: “Me too”. The pair toasted as Mr Verhofstadt continued: “If we make an agreement with the Brits then we are going to pour 100 of these.”

Mr Verhofstadt, who chairs the group, is then heard shouting: “This is the Brexit Steering Group.”

Toasting once more, the Europhile shouted: “For two years together – yeah!”

He then makes a third toast and said: “And then I think the transition period also. Another three years.” 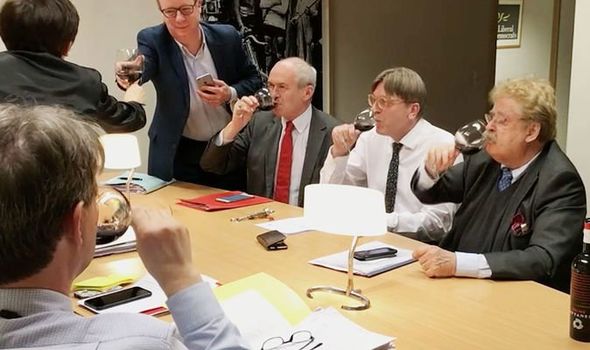 Throughout the Brexit process, Mr Verhofstadt has been open about his disapproval of Brexit and repeatedly called for Britain to have a second referendum.

The Belgian MEP and former Prime Minister of Belgium this week vowed to back the Liberal Democrats in their fight to stop Britain’s exit from the EU during a visit to London on Friday.

Mr Cable launched his party’s campaign this week with the message of “B****cks to Brexit” as they are battling to keep the UK in the European Union.

While out in Camden this morning with the Lib Dem leader, Mr Verhofstadt said his presence was not foreign interference in the UK’s European Parliament elections as he was “a Lib Dem”.

He added he was backing the party because it opposed Brexit.

The MEP said to BBC journalist Iain Watson he “doesn’t know” if the UK will leave the EU, before adding “it’s never too late”.

When asked if he’d back other remain parties, he still leaned towards the LibDems’ long-standing pro-EU position.

Mr Cable said he was campaigning to combat “ugly populism”.

Sophie Wessex heartbreak: Why Prince Edward’s wife has not been wearing engagement ring