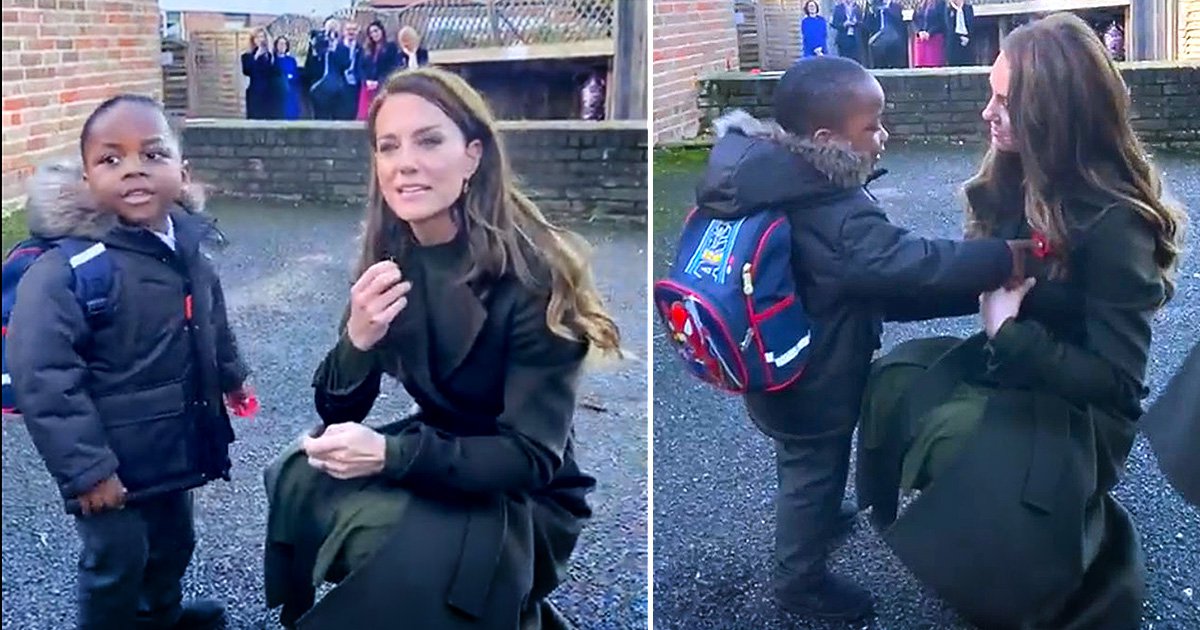 The Princess of Wales gifted a three-year-old boy her poppy in adorable scenes in London today.

Kate struck up a conversation with ‘chatty’ Akeem during a visit to the Colham Manor Children’s Centre in Hillingdon.

The royal toured the facility in her role as patron of the Maternal Mental Health Alliance (MMHA).

After she introduced herself to Akeem – as Catherine rather than Kate – she then asked if he had a poppy.

The three-year-old then replied that he ‘hadn’t found one’ just yet.

He then reached out to touch the poppy on Kate’s jacket.

She quickly asked: ‘Would you like mine? You can have my poppy. Shall I see if I can get it out?’

She added: ‘It’s remembering all the soldiers who died in the war. There you go, that’s for you. Look after it!’

Kate then asked for Akeem’s mother in the crowd and gave her Akeem’s poppy’s pin for safe keeping.

Staff from the children’s centre watched on fondly as the exchange was shared between the royal and the toddler.

Rhiannon Mills, from Sky News, shared the clip on Twitter and wrote: ‘It’s not everyday you get a poppy from a Princess. Akeem who’s 3 was very chatty when Kate unexpectedly stopped to say hello at a maternity mental health visit so she gave him her remembrance poppy.

‘Thanks Liberty from Colham Manor primary and Akeem’s mum for letting me share.’

The Princess of Wales has visited the children’s centre to learn how the mental health of mothers is being supported.

She joined a mother and baby group to speak with parents about their experiences and found out more about the work of MMHA’s member organisations – Home-Start and Birth Companions.

Today’s visit to York by King Charles and Camilla Queen Consort made headlines after three eggs were hurled in the direction of the couple.

Metro later revealed that Patrick Thelwell, 23, was the man who allegedly staged the protest.