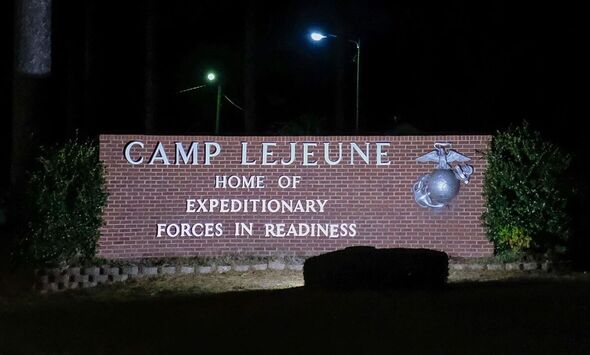 In October the Sunday Express revealed that up to a million military veterans may have suffered from serious illness after staying at Camp Lejeune, a United States Marines Base.

Though most are American, thousands of British service personnel were also regularly deployed to the base in North Carolina between 1953-1988 when its water sources were systematically contaminated.

In August US president Joe Biden allowed former servicemen and their families who became seriously ill after being exposed to the toxic water to apply for compensation.

Last night one British veteran told how he contracted both bladder and prostate cancer while he spent time at the base in 1988.

“My life changed completely, I’ve lived from day to day. I should have been told about this years ago, but neither the Ministry of Defence or the army has ever been in touch to explain things or tell us that we might be at risk,” said the former Warrant Officer, who spent three months at the camp in 1985 as part of a British Army training team.

The base’s water supplies contained toxins from 240 to 3400 times levels permitted by safety standards after two of its water treatment plants were found to contain 70 chemicals.

Also found was benzene, said to be from an 800,000 gallon leak from the base’s fuel farm and strontium-90, an isotope known to cause leukaemia and other cancers which entered the water supply from a radioactive dump site near the camp’s rifle range.

Crucially, base commanders were informed of concerns in the 1970s, but failed to act on them, and even refused to pass on the contents of independent tests to state water authorities.

Effects from the poisoning range from leukaemia, aplastic anaemia and other myelodysplastic syndromes to bladder, kidney, liver and lung cancers as well as Non-Hodgkin’s lymphoma and even Parkinson’s.

In the US around 5,000 claims were filed in the first month in what might become one of the largest mass litigations in US history.

While the MoD is not legally liable for the contamination, the 66-year-old grandfather, who served for 25 years and does not wish to be named, accused it of abandoning veterans who could be affected.

“We should be officially contacted by the MoD and told about the risks that this poisoned water has had on our health and what the ailments are,” he said.

“I won’t say it is a cover-up, but I think the MoD is making light of this. The disappointing thing is that someone knew that things were not as they should be and nothing was done about it then, and nothing is being done about it here now.

“We served our country and we deserve a bit more honesty.

“I believe we should be offered assistance and legal advice by the MoD because like me, there will be other people out there who, like me, have these cancers and our time at Camp Lejeune could be the cause.”

Mac, a former Royal Marine of the 40 Commando, was stationed at Camp Lejeune in 1973 and was later diagnosed with bladder cancer. In 2011, he had five tumours removed.

“I’ve approached the MoD myself for information and advice but the response was totally negative,” he said last night.

“There must have been aware of what was going on at Camp Lejeune but they’ve done nothing in terms of making contact with us and I think that’s terrible. It’s a disgusting way to be treated.

“There are British veterans who were stationed there for six months, even up to two years on secondment, and some later took permanent jobs there, so the MoD really does have a responsibility to notify all of us of this calamity and help us out.”

British military servicemen exposed to the toxic drinking water are now being urged to seek independent legal advice, but claims for compensation must be made before August 10 next year.

Anyone who spent a total of 30 days living or working at the base between 1953 and 1987 is eligible.

Paul McClorry of Hudgell Solicitors, who is representing both men, said: “In the US, thousands of former servicemen and women are pursuing claims because of the devastating effects the poisoned drinking water has had on their health.

“The reason they can now do this is because they are not only well informed but because the US Government has taken active and constructive steps to enable them to seek compensation.

“However, here in the UK there is silence on the issue and that can’t be right.”

An MoD spokesman said: “If there are any veterans who served at Camp Lejeune during this period and believe their health was affected, we would encourage them to apply for compensation under the War Pension Scheme.

“We have always been clear that any veterans believing they have evidence of their health being affected while serving can apply to the War Pension Scheme.”