BERLIN — Attackers with rifles and handguns opened fire on the busy streets of central Vienna on Monday night, killing at least two people and wounding many more in what government officials quickly labeled a terrorist attack.

Interior Minister Karl Nehammer described the attackers as “heavily armed and dangerous,” but no group immediately made a claim of responsibility for the violence.

The mayhem was unleashed on a mild autumn night as many Austrians ventured outside for a stroll or a last dinner out just hours before the country was to go on a new nationwide coronavirus lockdown.

The gunmen opened fire at perhaps half a dozen locations, all in the same area, the authorities said.

At least 15 people were being treated for injuries at hospitals, a spokesman for the hospital association said. Michael Ludwig, Vienna’s mayor, said at least seven people were seriously hurt. At least one of those shot was a police officer.

“We are going through a dark hour in our republic,” Chancellor Sebastian Kurz said in a statement. “Our police will move consequently against the perpetrators of this despicable terror attack.”

The attack, which began around 8 p.m., took place in Vienna’s Inner City district, a nightlife hub packed with restaurants and bars a short walk from the Danube. The police, who reported several “exchanges of shots,” mobilized a large response that shut down a segment of the city’s historical heart. 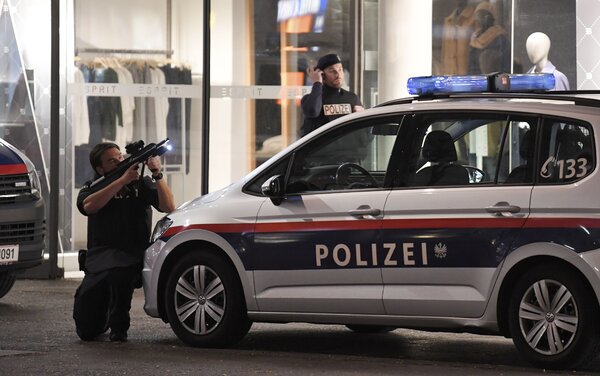 The shootings took place near the city’s main Jewish synagogue, the 19th-century Stadttempel. The temple was closed at the time, and it was not clear if it had been a target, but it was the scene of a terrorist attack in 1981 that killed two people and left dozens wounded.

Video broadcast on local media Monday showed an assailant wearing a black hood running up to a man, shooting him at close range with a long gun, running away and then returning seconds later to shoot him twice more with a handgun. A spokesman for the Interior Ministry, Harald Sörös, described the victim as a passer-by.

That video was one of several that made their way onto social media and local news broadcasts purporting to show snippets of the chaos and bloodshed. The authorities urged people to hand such video over to them, rather than posting them publicly.

One video showed people aiding a wounded person lying in a pool of blood, just outside a restaurant on Ruprechtsplatz and less than a mile from the Austrian Parliament building. Several chairs in the restaurant’s outdoor area had been overturned, as if abandoned in a hurry.

Another video showed a gunman firing a rifle twice down a street, though the target could not be seen, and in others, people ran for cover or ducked behind obstacles as shots echoed through the streets, and heavily armed police officers took up positions around the area.

“We just saw quite a few people running, had no clue what was going on, then heard the shooting and a few people screaming,” said Julia Schrammel, who was having dinner with her three cousins at Motton am Fluss, a restaurant on the riverfront, when the attack took place.

“It took them a while to lock down the restaurant, but now we are locked down here,” Ms. Schrammel, a 24-year-old student, said hours after the shooting began. “We are watching the news from a TV in the restaurant, there are all sorts of rumors going on.”

Emergency vehicles blocked off streets and a streetcar line through the area was shut down. The sound of sirens and helicopters filled the night air as Austrians struggled to absorb what was happening.

“We are in shock,” said Farnaz Alavi, a 34-year-old human resources consultant in Vienna. “It feels like they orchestrated this attack on the last night of the lockdown when lots of people were out for maximum impact.”

Early Tuesday, the sense of crisis eased a bit as the police began escorting people out of restaurants and through safety zones. The opera and a theater were also evacuated.

“There is a lot to monitor,” Mr. Ludwig, the mayor, said. “Many people are still in the inner city and we have to see that we get as many of them out of there.”

A heavy security force was deployed to the center of the city, and Austrians were urged to stay home. The chancellor said he had called in troops to ensure the security of official buildings, freeing up the police to “concentrate fully on the fight against terror.”

Coronavirus could have been in Britain WEEKS before first thought, experts warn