Viewers asked if Kwasi Kwarteng was ok after he began sweating heavily during questioning from Sky News host Adam Boulton on Boris Johnson’s Brexit plan. During the clash between the two on Mr Johnson’s insistence, there would be no need for tariffs in a no deal Brexit, Mr Kwarteng could be seen sweating heavily. His sweating continued through the interview as the Boris ally struggled to give answers that satisfied the Sky News host.

Mr Boulton began by saying: “What about these claims Boris Johnson is making that under WTO terms tariffs wouldn’t have to come in.

“When, for example, Liam Fox a lifelong Brexiteer, unlike Mr Johnson is saying well actually that is wrong and he’s the trade secretary.

Mr Kwarteng replied: “The first thing I’d say is that Boris has been a lifelong Brexiteer.

“I remember reading articles saying Brussels was a racket in the 90s. 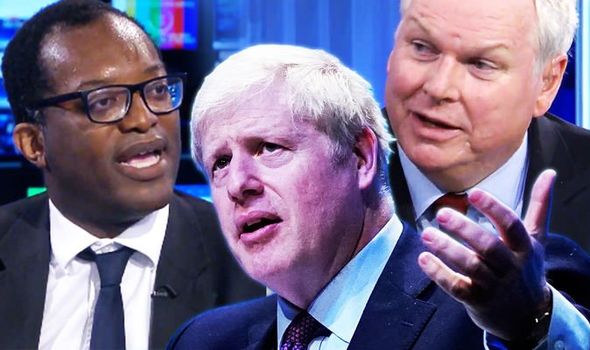 “I think the point that he is making, and it is a broad point that I have campaigned for is that we want to have unilateral free trade.”

The pair begin to speak over one another as they argue over whether Boris is correct in his statement of no tariffs.

Mr Boulton replied: “The reality is you have got a man who is a Brexiteer and the bank of England both saying actually Boris Johnson is talking nonsense and we don’t have a reply to that.

However, Mr Boulton quickly shot back that either Mr Johnson was or Liam Fox and the bank of England were.

They Tory MP snapped: “We all know they have certain positions.

“The governor of the Bank of England has openly said he thinks Brexit will be a disaster and he has been wrong before.”

The Sky News host interrupted to conclude that from Mr Kwarteng’s response it appeared that if someone disagreed with Boris Johnson his allies would assume it because that individual is politically motivated and therefore completely dismissed.

Those watching the interview were quick to take to Twitter to discuss Mr Kwarteng’s ability to confidently reply to allegations against Mr Johnson and a viewer called Mick tweeted Mr Kwarteng to ask if he was ok.

Ian Dodson said: “Kwasi Kwarteng is completely on the ropes, even he doesn’t believe what he’s spouting, it’s obvious because of the excess sweating.”

Another agreed and wrote: “Oh I totally love this, Kwasi Kwarteng is literally sweating profusely as Adam Boulton totally exposes him. Epic TV this.”

Harvey Waybill insisted: “Kwasi Kwarteng is sweating his a** off on Sky News right now, literally and figuratively covering for Johnson, superb stuff.”