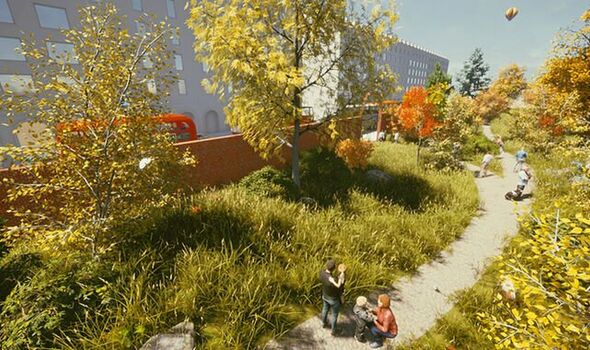 The green space in the heart of the capital is designed to reflect the late monarch’s “love of nature”.

Draft designs show urban rewilding meadows and woodland with rich biodiversity, echoing nature from all parts of the British Isles.

The Royal Park would run alongside Grosvenor Place, a busy road that stretches from Hyde Park Corner to Victoria.

The perimeter wall of the palace’s 42-acre site would be kept, with an arch, or a number of arches, knocked through to allow access into the walled garden. A new high-security fence would be installed along its boundary with the palace.

Stefan Simanowitz, founder of the Buckingham Palace Park Project, first sent details of the plan to royals in 2015 as an idea to mark the Queen’s 90th birthday.

At the time the then Prince Charles was said to be interested in the proposal.

The plan then shifted to mark the Queen’s Platinum Jubilee this year before being adapted for a memorial garden.

Mr Simanowitz said the park would be “a living legacy to our longest-serving Monarch”.

He added: “We are hopeful it might act as both a fitting tribute to the Queen and a welcome new green space in a congested corner of London.”

Queen abdication fears dismissed: ‘Frustrated’ monarch keen to get to back to royal duties