SKOPJE, North Macedonia — With its bitter naming dispute with Greece finally settled, and NATO membership expected by the end of the year, North Macedonia on Tuesday received another sign that its nearly three decades of international isolation are ending: the country’s first papal visit.

At a gathering with senior government figures, Pope Francis praised North Macedonia as “a bridge between the East and West,” said that its history of diversity would serve it well in a closer relationship with European nations, and expressed a hope that “integration will develop in a way that is beneficial for the entire Western Balkans.”

The country declared independence from Yugoslavia in 1991 as the Republic of Macedonia, but its diplomatic hopes were long blocked by neighboring Greece, which considered that name a potential claim to its own northern province. Both sides agreed to the name North Macedonia this year as part of a deal to normalize relations and potentially to ease the country’s path into the European Union.

Not all of those at the gathering shared the pope’s enthusiasm for these developments. President Gjorge Ivanov, who represents a conservative party that considers the name deal treasonous, told the pope that his visit had come at the time of “great divisions” in the country, which he referred to as the Republic of Macedonia. 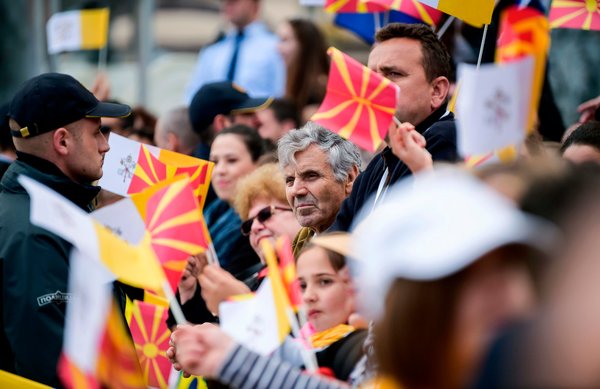 Mr. Ivanov is days from leaving office, however, having reached his term limit. His successor, Stevo Pendarovski, who was elected on Sunday, is an avid supporter of the name deal.

Prime Minister Zoran Zaev sounded determinedly upbeat about the papal visit. “There is joy all around, and hope after we showed courage in our decisions,” he said. “We can show that we can get along with everyone, and the pope can give us encouragement to be better people.”

“The Catholic Church has always recognized that our church has suffered a historical and cultural injustice with continued refusal to recognize our autonomy,” Metropolitan Timothy told the local news media on the eve of the pope’s visit. The Vatican “lends us support in the ecumenical dialogue without antagonizing other Orthodox churches,” he added.

North Macedonia has a population of about two million, mostly Slavic and Orthodox Christian; about a quarter are ethnically Albanian, most of them Muslim. Catholics number only about 15,000, including followers of the Western Roman Church and the Eastern Greek Church.

The country has added significance for Francis and for many Catholics, however, because its capital, Skopje, was the birthplace of Mother Teresa, the nun beloved for her work with the poor and sick of India whom Francis made a saint in 2016.

At a Mass in the main Macedonia Square, the pope called on worshipers to find inspiration in Mother Teresa, saying: “She went to the Lord exactly as she went to the dispossessed, the unloved, the lonely and the forgotten.”

Pilgrims, most of them young, from all over the country and the region were waiting to see Francis, singing and dancing and waving their national flags over which so much blood was spilled during the Balkan wars of the 1990s. He moved slowly through the crowd, shaking hands over the fence, smiling and waving to those farther away.

“It’s a big honor for a small country,” said Maja Patnenova, 28, a manager in a computer company in the eastern town of Strumica. “He is the only one who has not forgotten us here.”

During the Mass, the pope warned against materialism and disinformation.

“We thought that conformism would satisfy our thirst, yet we ended up drinking only indifference and insensitivity,” he said. “We gorged ourselves on networking, and lost the taste of fraternity,” ending up lonely and “overwhelmed by impatience and anxiety.”

The Rev. Goce Kostov, a priest who works in Strumica, near the border with Greece, said that Francis, like Mother Teresa, had made it his mission to visit faraway places and reach people who had been neglected, abandoned and forgotten.

“He goes to the periphery — and where are we here, if not on the periphery, economic, geographic and political periphery?” Father Goce said in an interview.

North Macedonia’s Catholic Church is made up largely of young people, he said, and is struggling with the same primary problem as the country’s Christian Orthodox and Muslims.

“They are leaving in droves, moving away from their country to seek better opportunities in the West,” Father Goce said. “We need to find ways to improve and keep them here.”

Anita Martinic, 45, a Serb and a Catholic who has lived in North Macedonia for five years, said she hoped the pope would “tell politicians to behave and do better work for their people.”

“His words might reach those in power, and they should really think about how they can make them stay and contribute so the country can improve and grow,” Ms. Martinic said.

Wrapped in the flag of Kosovo, a predominantly ethnic Albanian country that seeks recognition of statehood 10 years after declaring independence from Serbia, Loreta Kryeziu, 18, said the pope’s praise for Mother Teresa was an inspiration. “She was Albanian,” she said. “That’s great for us.”

Not far from the square, two economics students, Viktor Slavkovski, 20, and Simona Stojceva, 21, were on a break from class. Sitting on a park bench below a giant poster advertising Francis’ visit, they were deep in conversation about leaving the country to work in the United States this summer.

“Honestly, I don’t know why he’s come here,” Mr. Slavkovski said. “It’s not like he is a president of a famous country. Or a rock star,” he added, pointing at another poster, of Lenny Kravitz, who staged a concert in Skopje last week.

“He was live on Instagram, walking the Old Bazaar,” Ms. Stojceva said of the musician. “It went viral.”

“Does the pope have an Instagram account?” she asked. (He does.) “It would really be cool if he went live,” Ms. Stojceva said.

Harry and Meghan cancel Invictus Games event due to coronavirus