Home » Europe » Want a Castle in Turkey? You May Find a Bargain

MUDURNU, Turkey — Looking for a castle on a cul-de-sac in the Black Sea region of Turkey?

You might even be able to get a deal on it.

The Yerdelen brothers, construction entrepreneurs from Istanbul riding a real estate boom, had plans to build more than 700 minicastles, with turrets and breezy rooftop terraces overlooking the forest, aiming to draw in Arabs from the Gulf countries who love to come to Turkey for its lush nature and Mediterranean climate.

At first, business was brisk: Half the castles were sold, they said, and building was going apace. Then oil prices slumped, hitting the buyers. Meanwhile, between terrorist attacks, a failed coup attempt and what many experts say was unsustainable borrowing, cronyism and huge public works projects with little economic return, Turkey’s economy ground to a halt.

Now, the development is almost at a standstill as the partners work their way through bankruptcy court but are still allowed to trade, their futures debated regularly in the news media.

Turkey was feted as the place to invest in the early 2000s, its largest city dubbed “Cool Istanbul: Europe’s Hippest City.” Under the business-friendly leadership of Recep Tayyip Erdogan, first as mayor of Istanbul, then prime minister and now president, the economy boomed and real estate prices soared.

The country was busy catching up with Europe in many ways. The government introduced mortgages in 2001 and reformed conditions for foreign buyers to increase investment in the sector. Rich Arabs and Russians joined European customers lining up to buy summer villas on the Aegean coast and luxury apartments and waterside palaces in Istanbul.

Mr. Erdogan made sure that foreigners could buy property relatively easily and dangled citizenship, if the investment in real estate was above $250,000. Developers began all manner of schemes to meet the burgeoning demand.

The Sarot group, run by the Yerdelen brothers and their partner, Bulent Yilmaz, decided to move away from their base in Istanbul, where they mostly worked on water and drainage projects to develop sites around the Roman spa town of Mudurnu in central Turkey, which is famous for its hot springs and healing waters.

The group bought land in several locations and began a hotel and spa complex, Harry Potter-style forest cottages and, in a secluded valley out of town, an entire suburb of minicastles, like a full-size Legoland display.

It was Mr. Yilmaz who first sketched out the idea on paper.

“He drew it, and we made it happen on the ground,” said Mehmet Emin Yerdelen, 56, the coordinator of the project.

For inspiration, they drew on landmark buildings in Istanbul, the Italianate Galata tower and the medieval Maiden’s tower, as well as British and American architecture, said his brother Mezher Yerdelen, 39, the chief executive officer of the Sarot group’s projects.

The result is rows of Disney-style chateaus, with gray-roofed turrets, circular balconies and balustrades, stretching over a million square meters, or 250 acres. A central shopping mall resembles the American Capitol, and lakes and gardens will link the whole.

The development straddles the region’s hot springs, and each minicastle will have under-floor heating and Jacuzzis on every level, with an option for an indoor pool, the brothers promise.

“The thermal water can be used for drinking and steam therapy; it is first class in the world,” said Mezher Yerdelen. “You can drink the waters, and it cures stomach ailments and kidney stones. If you bathe in it, it heals skin problems, rheumatism and slipped disks.”

The company has done geological surveys and already drilled and capped the hot water 200 meters underground. The temperature is 68 degrees Celsius, or 154 degrees Fahrenheit, and the water is plentiful enough to supply and heat the entire complex, he said. 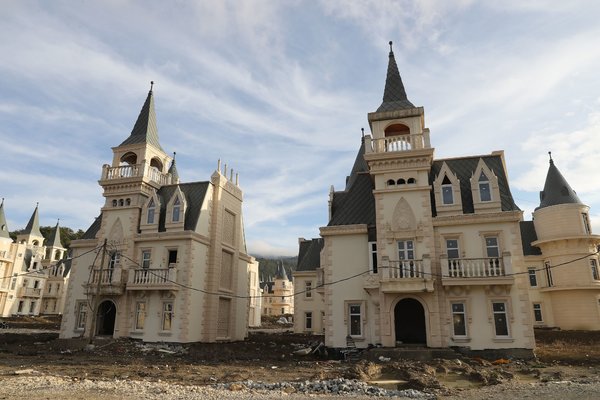 Aiming for the Arab market, the partners named the development the Burj al-Babas Thermal Tourism Company and began marketing the houses through their real estate agency in Kuwait. They broke ground in 2014 and built quickly, with 2,500 workers, aiming to complete the project in just four years.

Buyers snapped up more than 350 of the houses, which are priced between $370,000 and $500,000, depending on location, Mezher Yerdelen said. By last year, half the buildings were underway.

Then world events intervened. And the Yerdelen brothers, like many other developers, began to feel the fallout.

“Our sales dried up,” Mezher Yerdelen said. Some customers canceled their agreements, some stopped their payments. The company applied for bankruptcy but on appeal won the right to continue trading so they can complete the contracted houses.

Mezher Yerdelen remains optimistic that the real estate market in Turkey will bounce back in 2019.

According to figures published by the Association of Real Estate Investment Companies in Turkey, foreign buyers have been returning since 2018. Roughly a third are from Arab Gulf countries.

On a recent tour, the castles looked like a vision out of a fairy tale under a light covering of snow, but up close they were largely empty shells. Construction was stopped for the coldest period of the winter and only a few gardens have been landscaped.

The mayor of Mudurnu, Mehmet Inegol, is an energetic supporter of the development and says the construction complies with all regulations. “Not one single tree was cut for the development,” he said. “In fact the investors chose the valley for its forests.”

Critics of the development include Orhan Sarialtun, president of the Chamber of Urban Planners in Ankara, Turkey’s capital, who complains that the architecture is not in harmony with Mudurnu’s traditional architecture.

He also objects to the concept of such development, saying that the extensive project would inevitably damage the forest and that the sale of secondary holiday homes that lie empty much of the year will not benefit the region as much as a hotel project might.

In the meantime the Yerdelen brothers are absorbed in dealing with the demands of the clients — all from the Gulf — they have secured so far. All the minicastles are identical on the outside, but clients have a choice among three different layouts and décor inside.

An elevator can be installed, as can cupboards in the bedrooms, an open-plan kitchen and bathrooms on every floor. And the indoor pool is optional.

Each mansion has its own garden, but there is little space between the buildings. Mezher Yerdelen said that most Arab customers already have lived in the United States and the West and are used to living in detached or semidetached housing, in proximity with their neighbors. “They don’t mind,” he said.

Some clients do want more privacy, and ask to enclose the property, Mehmet Emin Yerdelen said. “They ask for walls,” he said, “but I say no, there will be trees instead.” He has planted evergreen shrubs to create a natural screen around some of the gardens.

Some buyers remain optimistic about the project. Imad Yousef, a real estate broker in Kuwait, is one of them. “I hope to make some money, and I will use it myself,” he said. “When the project is finished, God willing, it will be amazing.”

For the unsold castles the brothers hope to develop timeshare agreements and divide them into apartments, with payment in installments. And as the Turkish lira has fallen, prices could fall.

Some have criticized the architecture and others the extensive development, but the mayor says it will bring much-needed employment. The government has promised road, rail and air links to the region, including a high-speed train passing through the area and connecting Ankara and Istanbul. The season for visiting Mudurnu runs all year, as the hot springs never lose their appeal, Mezher Yerdelen said.

“Those today who criticize the architecture, tomorrow they are going to pay to come and see them,” Mr. Inegol said.