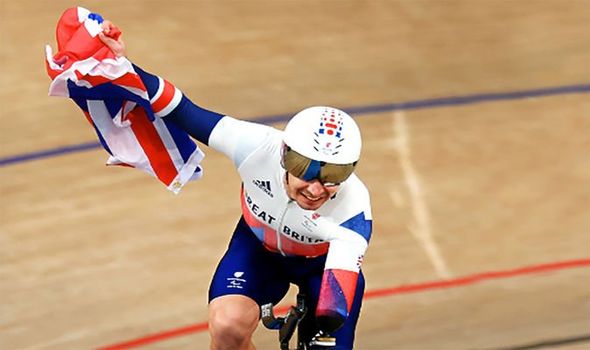 Jaco rated this as the best moment of an extraordinary life. He said: “It’s right at the top, the best thing.

“I have done some amazing stuff and they all had their difficulties.”

Jaco was hit by a rocket-propelled grenade while serving with the Parachute Regiment in 2009, losing his left arm at the elbow and suffering a collapsed lung, punctured internal organs and a fractured knee.

He needed 11 rounds of surgery and intense rehabilitation.

Yet his build-up to Tokyo saw him trek to the North Pole in 2011 – joined by Prince Harry – run marathons and conquer mountains across the globe.

The South African-born athlete was the victor in an all-British final with Scot Finlay Graham, 21.

Jaco’s proud fiancée Kathryn Pringle said: “It means everything to him. As soon as he could walk and run again, he found cycling. His dream was to be a Paralympic champion and he’s done that.”

Looking back on his experiences in Afghanistan and at current events, Jaco said: “I’m not disappointed or regret what happened to me. I had to go out and do my job. My thoughts go out to those who paid the ultimate sacrifice.”

He revealed the scale of his journey when he said last year: “To wake up having quite a few bits missing, not being able to feed yourself or go to the loo, it was a big shock.

“There were times I did wonder why I was still alive and wished I was dead. But you recognise that there must be some reason why you survived.”

Britain’s gold rush continued with dressage rider Lee Pearson winning his 12th title and success for Tully Kearney and Maisie Summers-Newton in the pool and for fencer Piers Gilliver in the men’s individual épée.