Tom Moore is raising funds by trying to walk the length of his garden one hundred times before his 100th birthday. 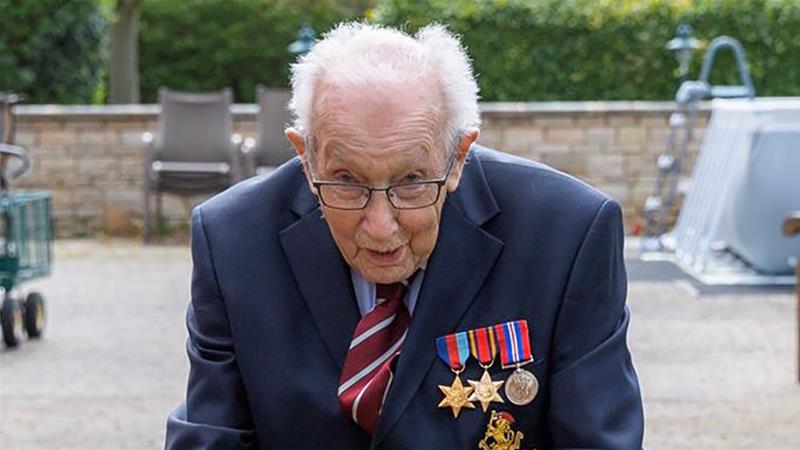 A 99-year-old war veteran has raised nearly more than 2 million pounds ($2.5m) for British health workers by attempting to walk the length of his garden one hundred times before his 100th birthday later this month.

Captain Tom Moore, who has used a walking frame to move around since breaking his hip, said he was grateful to the National Health Service (NHS) for the treatment he received and wanted to do something in return.

I’m Captain Tom Moore, war veteran, 99 years of age (soon to be 100) and I’m walking for the NHS to raise money for our heroes.https://t.co/M1dkvoV3kE

Britain’s state-funded NHS is under severe strain as it treats large numbers of people suffering from COVID-19, the disease caused by the new coronavirus.

The death toll from COVID-19 in British hospitals reached 11,329 on Monday, the fifth highest globally.

Medics have been widely praised for their bravery and professionalism during the crisis, including by Prime Minister Boris Johnson, who recovered from the virus after being treated by the NHS in a London hospital.

Moore, who turns 100 on April 30, had hoped to raise 500,000 pounds, but his charity campaign has quadrupled that figure already.

The veteran, who served in Asia during World War Two, had a message of hope for his compatriots.

“That’s the way I think I’ve always looked at things: tomorrow will be a good day,” he said.